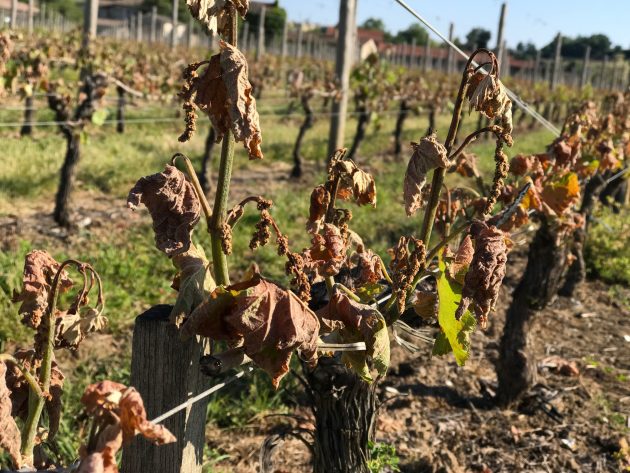 The extent of the damage from the frost at the end of April is now becoming clear. Following on from three really good, generous vintages – culminating in the biggest Bordeaux harvest for more than a decade in 2016 – we’ve been brought back to earth with a very significant bump. Freezing temperatures in the early hours of Thursday 27 April, and to a lesser extent the morning before, have wiped out the crop in many vineyards, right at the start of the growing season. ‘The Lord giveth…’ you might think. ‘C’est la nature’ a neighbour said, with a consoling shrug of the shoulders.

Until last week, I don’t think I’ve ever taken the risk of Spring frosts that seriously. Really damaging frosts in Bordeaux are rare – the stuff of legends, such as the terrible one in April 1991, which almost killed off the harvest, and the even worse one in 1956, which killed off a lot of vines, notably on the Right Bank around St-Emilion.

We did, though, have a warning at exactly the same time last year, when temperatures dropped to freezing before sunrise (on 29 April, here). A few Bordeaux vineyards took a hit, but nothing compared to the losses in Champagne, Chablis and the Loire.

Being based further south, I’m less of ‘G for Gel’ man than ‘G for Grêle’. As anyone who is familiar with our tales of woe, it’s the threat of hail that sends me into a nervous spin. We lost over half the crop in May 2009 and again in August 2013 to hail, so it’s understandable.

But all that changed last week. ’Le gel dévaste les vignes de Gironde’ ran the headline in the Sud-Ouest last Friday, 29 April. And it wasn’t an exaggeration. 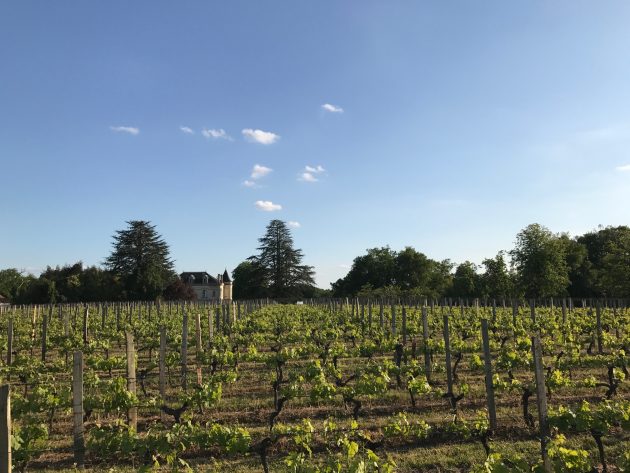 In many ways, our vineyard at Château Bauduc, some 15 south east of the city of Bordeaux, is analogous to the wider picture across Bordeaux. Come down the drive and you’ll see healthy shoots and leaves of Sauvignon Blanc on one side, Sémillon on the other, then older Merlot and vigorous new plantations of Merlot and Cabernet. They all look green and splendid – well, normal in fact – as do all the vines on the plateau at the top of our hill, surrounding the house. However, take a walk down the rows on the east, south and west facing slopes, and the contrast becomes clear. The further down the hill you go, the more dramatic the impact. 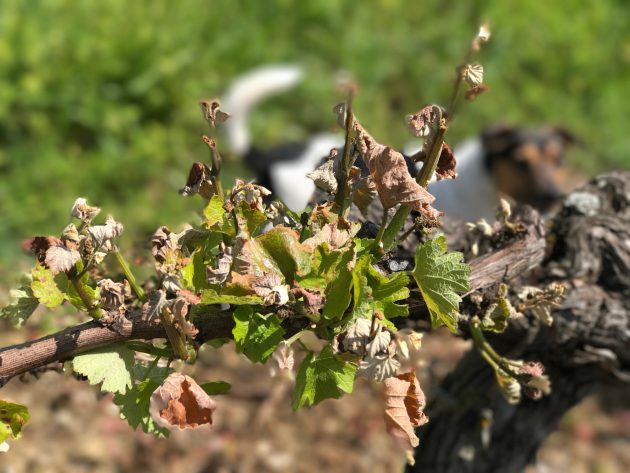 What you’ll see are the vines captured, sadly, at their very moment of development last week, as if frozen in a time warp. When the frost hit – around -2° to -4°C – the Merlot was quite developed, as bud break had been a month earlier. The Cabernet Sauvignon and the Sauvignon Blanc much less so, depending on the parcels, and in the case of the Cabernet, it’s just the buds that have been frazzled. (If we do get a second bud break, we’ll be picking in November.) 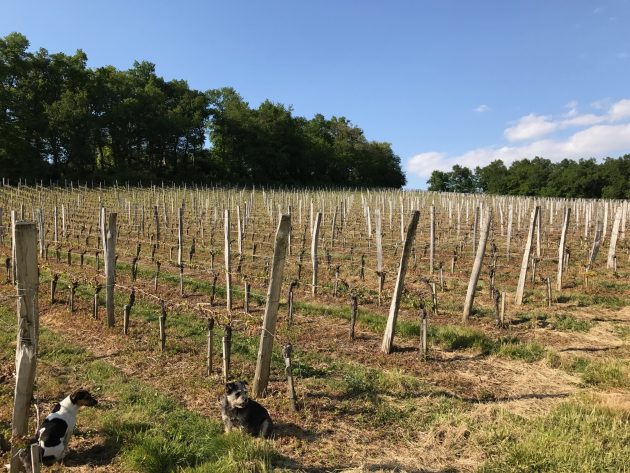 Frost damaged Sauvignon on the lower slopes at Bauduc.

At first, overall, we thought ’30/70’. Then, as it became clear that many of the tiny, unformed bunches of grapes would never flower later this month or in June, ’40/60’, either way. Now, a week on, we’ve settled on an estimate of 50% loss, based on the surface area out of our 25 hectares (63 acres) and the number of vines (roughly half the 120,000 in all). All varieties have been affected – but if we look on the bright side, we can still make something out of everything. What’s almost more of a concern – and vine growing is a long term game – is making sure we look after and treat all the vines well enough to have something to prune for next year and the season beyond.

Now, for the rest of Bordeaux.

Guy, the ’prestateur’ from whom we hire our harvest machines, came round the other day as part of a courtesy visit to many of his 40 or so vineyard clients, most of whom are in the Entre Deux Mers and the Côtes de Bordeaux. ’Vous êtes dans le moins touchés’ he enthused. (I much prefer the softer word ’touché’ to ’damaged’ or ’hit’.). But dear God, I thought, at 50% down, we’re in the LEAST damaged category? 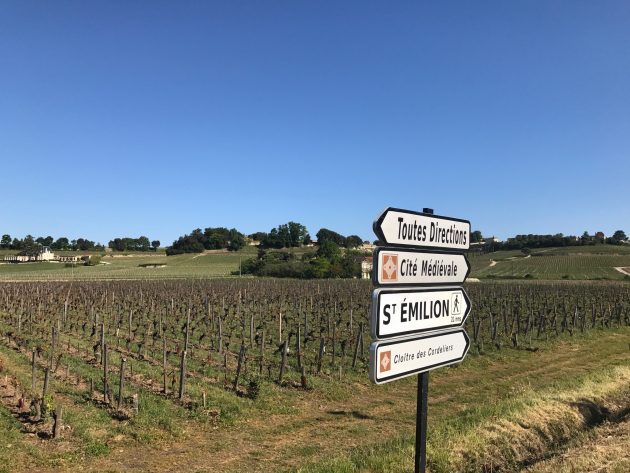 Far less frost damage to vines on the hillsides in St-Emilion compared to these, lower down.

So I’ve had a good drive around. Now, I don’t want to give the impression that it’s all a disaster, because there are many thousands of hectares that are healthy and unscathed, but I haven’t seen anything like this. I’ve never said ’oh my God’ so often, albeit from a grower’s perspective. Also, unlike the very localised nature of hailstorms, the frost damage is evident in pockets right across the Bordeaux region.

Now it’s just possible that some people are wondering how the frost damage might impact their buying strategy, especially in the light of the en primeur campaign that’s just kicking off for the quite brilliant 2016s. So here’s a broad assessment of each appellation.

This is what I’ve seen myself, so forgive any inaccuracies – and Bordeaux is a massive region. 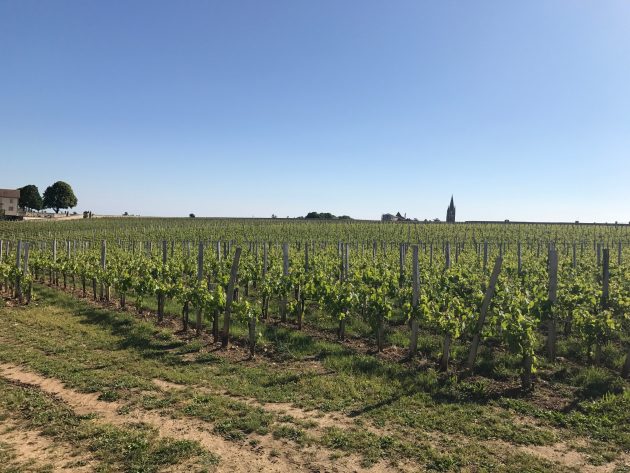 What they should look like. No damage on the limestone plateau in St-Emilion.

First, the good news. The majority of top estates have not been damaged. I will not mention individual chateaux as it’s not fair, and their vineyards can be spread out around their respective appellations. The communication of any news is down to them, and some are notoriously discrete.

To begin, the joys of being bang on the Left Bank of the Gironde:

St-Julien
Looking good, only a little damage in the ’inland’ sector, towards St-Laurent.

Elsewhere on the Left Bank

Margaux
Many estates entirely unaffected but there is serious damage, with up to 100% loss, in numerous parcels. Notably in the Arsac, Soussans and Cantenac communes.

Moulis and Listrac
Some vineyards are fine but there are some badly hit zones here.

Haut-Médoc
This is a huge area from the south near Margaux to the north of St-Estèphe. Some vineyards are absolutely fine but there’s significant damage to some near Margaux, and in the central part around Cussac, and out towards St-Laurent where several significant vineyards are located near St-Julien. I saw much less damage to the Haut-Médoc vineyards north of St-Estèphe around St-Seurin.

Médoc
The Médoc is a confusing term, used for the whole area of the Left Bank north of Bordeaux, but as for the actual appellation in the north, most of it is untouched (eg towards the Gironde estuary) but there is significant frost damage to a fair number of vineyards.

Pessac-Léognan
Many vineyards escaped any damage but some parcels were badly hit.

Graves
Many vineyards were untouched but significant damage in others.

Sauternes
As above. Untouched vineyards but others hit. (I need to have another look here, and in Barsac.) Right Bank

It has been widely reported that the Right Bank of Bordeaux was badly hit, as was the Entre Deux Mers, and – oh my God – there are some desperately unlucky vignerons, far and wide.

First, the good news. Again, many of the top estates in St-Emilion and Pomerol have avoided any major damage. But others have seen huge losses.

St-Emilion
The vineyards up on the limestone plateau and the slopes around the town of St-Emilion, and out towards the Mondot secteur and the Côte Pavie, largely escaped the frost. That includes many of the St-Emilion Premiers Grands Crus Classés.

Elsewhere in this huge appellation, there are mixed fortunes, with many facing 100% loss in 2017. Some Grands Crus Classés have been horribly hit.

Down on the plains towards the Dordogne river, such as around St-Sulpice, the losses can be dramatic. Whether viewed from the more verdant hillsides, or from the valley floor, there’s a sea of frost damaged, brown vineyards.

Out towards Pomerol, there is significant damage in some zones of St-Emilion – in leading estates too. It is genuinely quite shocking.

Pomerol
Likewise, those leading properties on the plateau of Pomerol fared well, some after doing whatever could be managed, with anti-frost candles in the vines and the like.

Away from this slightly raised ’plateau’, which is not a huge area, it’s a picture of mixed fortunes. Some vineyards on the lower parts of Pomerol have had total frost damage, with bedraggled Merlot vines looking brown and burnt.

St-Emilion satellites
Many vineyards, especially up in the hills, escaped the frost but many others hit, especially those on lower ground.

Fronsac
Those on the high limestone hills did best, although not all. Much more damage further down.

Bourg and Blaye
A huge region, combined – many vineyards intact but numerous parcels hit, with some massive losses here.

Entre Deux Mers and Bordeaux AC
It’s curious how some vineyards survived intact while there are catastrophic losses in an adjacent valley. Such fine margins. This is a huge area – more for red Bordeaux Supérieur and generic Bordeaux than white, and it’s on my doorstep, so I’ll take more time to understand this.

Conclusion – for the moment

The frost damage is widespread, from the very north of the Médoc to the east in Castillon, to the south in Sauternes and the Entre Deux Mers. It is probably no surprise that a great many of the top chateaux of Bordeaux have exceptional terroirs for avoiding the ravages of frost. But not all.

A huge number of vineyards will not see a crop in 2017, with concerns also for the following year. The full impact isn’t known by any means, and the impact on the flowering at the end of May and in early June could prove a major factor. At this early stage, I’d hazard a guess that overall production will be down at least 30% from last year. The unfair nature of this game, of course, is that the losses will be very unevenly spread. 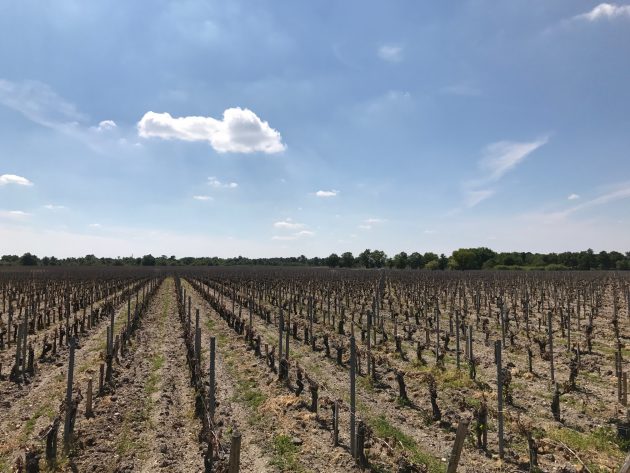 No silver lining for this parcel in Margaux, sadly.