Next: Things to do >

The farmhouse is a great place to do very little but it’s also the perfect base from which to explore the vast Bordeaux wine region, as we are within half an hour of St-Emilion, Pomerol, Graves, Pessac-Léognan and Sauternes, and less than an hour from Margaux and the Haut-Médoc.

The charming town of Saint-Emilion and the superbly restored city of Bordeaux, both Unesco World Heritage sites, are just over 15 miles away. The sandy beaches of the Atlantic coast near Archachon are about an hour’s drive and worth a trip in fine weather, as is Cap Ferret - even if it does take half an hour longer. Heading inland, there are lovely bastide towns and pretty villages set in the peaceful countryside near the Dordogne and Garonne rivers.

For eating out, there is a wide choice of excellent restaurants to try, whether you want to go somewhere within walking distance, to head off to Bordeaux or be close to the vineyards. In particular, the restaurant scene in and around St-Emilion and Pomerol has been on a roll in recent years, with at least ten restaurants we could recommend. (See Things to do.)

The farmhouse is self-catering and is well equipped for cooking and eating, both inside and out. Thankfully Créon, our local town, has become a magnet for artisanal food shops of late. We now have three bakeries, four butchers and five fruit and veg stores within walking distance of us, and the revamped fishmongers has a huge selection. (Granted, if you buy something in a few of them, the preferred mode of transport might not be on foot.) The excellent food market every Wednesday morning in Créon is as popular as ever.

Here is a map of Créon with places of note. 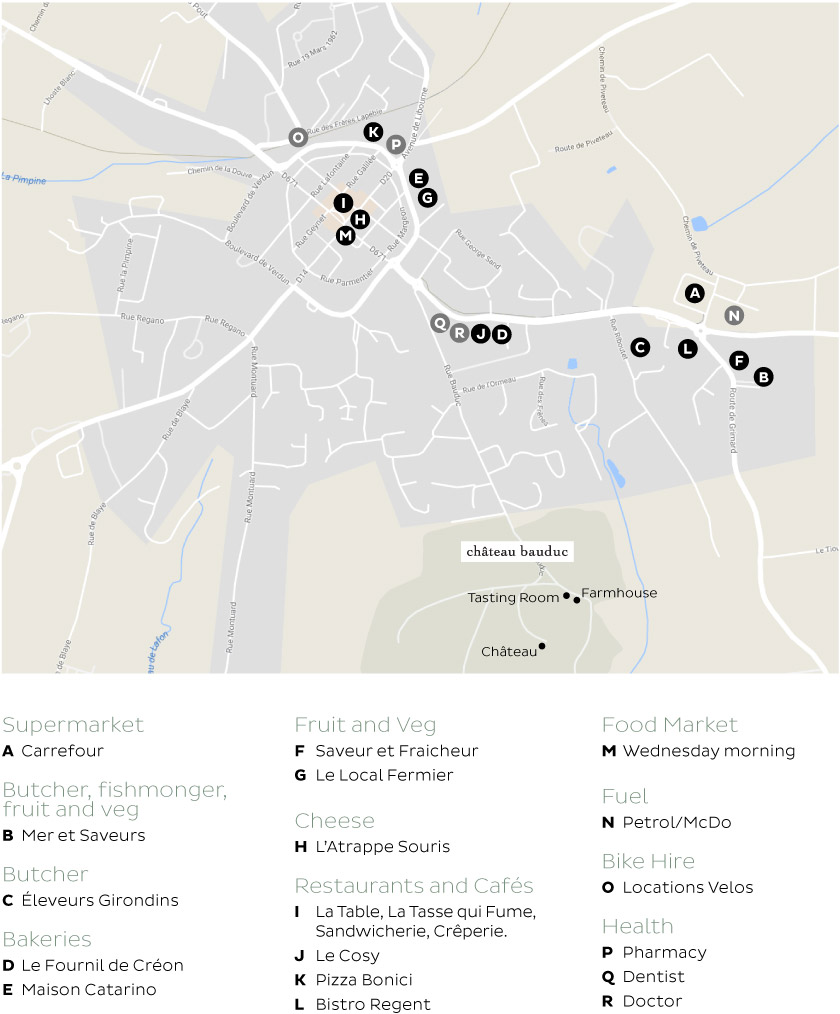 Carrefour is close by and is open 9am to 8pm from Monday to Saturday, but Sunday mornings only from 9am to 12pm. They do not give out free bags so take one from the house or buy a new one there.
Turn right at the roundabout at the end of our road (Rue Bauduc) and go 800m to the next roundabout. You can't miss the big Carrefour down on your left. We buy all the usual stuff here; note that the fresh milk has blue tops for semi-skinned and red for full cream milk (unlike the UK). The Reflets de France house brand is very good. Good cheese selection, tasty ’en pleine air’ free range chickens and magrets de canard on the shelves, and a good meat counter for steak haché ’en vrac’ (minced beef), lamb, beef, pork, chicken.

Le Fournil de Créon. Open 7am till 8pm, 7 days a week (Sundays 7pm).
Turn right at the roundabout at the end of our road, and it's 100m up on the right. Huge choice including desserts, such as apple tart. If you want a sandwich you can choose the filling and the type of bread.
Maison Catarino. Also open 7am till 8pm, days a week, 7am till 12pm Sundays. Excellent bread and much more. Buy 5 croissants etc and get 1 free.
It's in Créon on the 'ring road', direction Bordeaux and Libourne. Turn left at the end of our road, then right after 50m at the Gendarmerie roundabout and it's up on the right after about 250m. There is also a bakery in the town square which is quite good.

Mer et Saveurs. Open 9am-12.30pm, 2.30pm-7.30pm. Closed Sunday afternoons and Monday.
Fabulous fish and delicious meat, along with a very good selection of fruit and vegetables. At the butcher’s counter, ask for the entrecôte ’façon Quinney’ from the older chap in the cap (he's the owner) and you should be cut a delicious, neatly trimmed steak about 5-6 cms thick.
The fish counter is superb, with a huge choice of fish and shellfish. We always ask for the fish to be prepared, as they are expert at it and life is too short to peel the skins off Dover sole or remove the membrane from monkish tails, or fillet a hake. The sauces in the packs, like beurre blanc, are good too. They will also prepare a platter of Fruits de Mer of your choice, as well as a tray of opened oysters, all served on ice.

Go to the end of our road, turn right at the roundabout and it's 800m to the Carrefour roundabout. Turn right (opposite the turning to Carrefour), direction Cadillac and Haux. 150m along, after several small entrances, take the left turn into the area with an Allianz sign on the first building. Go down there and turn left at La Poste depot, and the parking to Mer and Saveurs is on your right.

Mer et Saveurs above has excellent fruit and veg, most of which has the postcode of the producer clearly marked if from France.
Fruits et Saveurs, on the way to Mer et Saveurs above, has a bigger selection and is also highly recommended. Open Tuesday to Saturday but not Sunday.
The Local Fermier next to Maison Caterino above is good too.
There's also a fruit and veg shop in the main square in town, near the crêperie.

Mer et Saveurs above.
The butcher at the Carrefour supermarket is good, as mentioned above, especially the counter, as are the free range (plein air) chickens on the shelves. Magrets de canard and sausages too.
Éleveurs Girondins. This is a large new butchers in the commercial area on your right towards the Carrefour roundabout. Very promising reviews from guests so far.
The butcher in the main square in town is fine but - with four all within walking distance of each other and Bauduc - we are spilt for choice.

L’Atrappe Souris. The lady owner has a great choice of lovely cheese, on a corner in the central square of Créon. Usually open Tuesday-Saturday, 10am-12pm, 4-7pm.

Open 8am - 12.30pm. It has been held every Wednesday since 1315, allegedly, and is worth a visit. It's one of the best markets in the region. The parking around the town gets very bunged up so if you go by car, one option is to park half on the pavement at the end of or road.
We often go to the large fish stall on the far side of the square, facing the créperie. In general, the best stuff is seasonal, often sold direct by the growers themselves. Do take care with buying some things, like cheeses and cured meats, as they can be priced on the high side.

There are lots of producers who come from the Atlantic coast to sell their oysters on a weekend, and we've been going to the same couple for many years. Madame usually has a setup opposite the town hall in the square, near the butcher. Monsieur has a stall by the huge Cave Cooperative des Vins on the other side of town, where there is plenty of parking. This friendly couple with dodgy English will open them for €1.50 a dozen if required – so take a large plate and leave it with them for a 15 minutes.
Oysters can be quite ‘milky’ or 'gras' in the summer months, so they're a bit better from September to June in our opinion, depending on your taste. Serve them cold with freshly squeezed lemon, or echalotte vinegar and finely cut shallots. Or try them with a small piece of Roquefort, and grilled under a hot grill for two minutes.

Excellent oysters are also available from Mer et Saveurs (see above), and opened if required.

Next: Things to do >