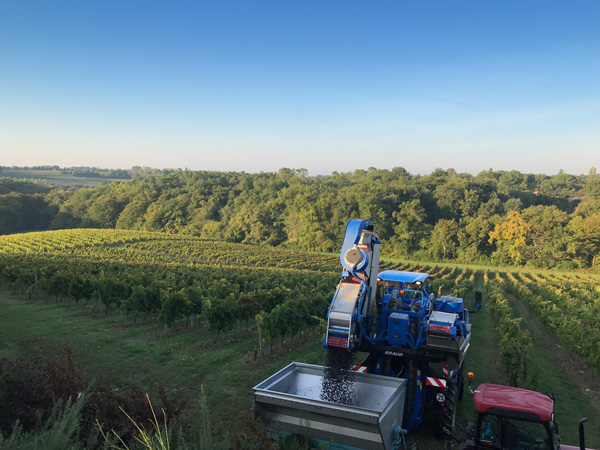 A glass half full, a glass half empty, and a ridiculously busy month.

September is usually quite full-on, what with the start of the harvest and a new school year, but the 2017 edition has been bonkers. Not only have we completed the white harvest - which would normally be the case - but, as with the rest of Bordeaux this year, the reds are almost all in too. We've also hosted so many events at Bauduc we’ve had to recruit a live-in chef - what we'd have done without Elly, Lord knows. 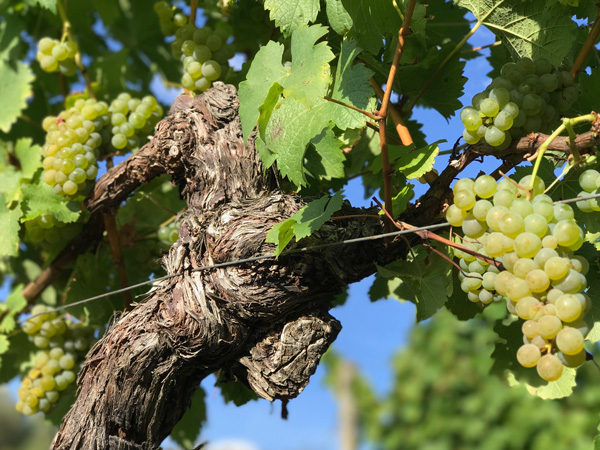 So, what about the 2017 crop? (If you'd prefer that without the comma, you'd be forgiven for simply scanning through the pics below.)

Even old friends might be bemused to know that this was our nineteenth harvest at Bauduc, although we really think of 2000 as our first full season at the helm. Still, both Daniel and Nelly have been with us since that ’in at the deep end’ vintage of 1999 and, as ever, they've been working their socks off. 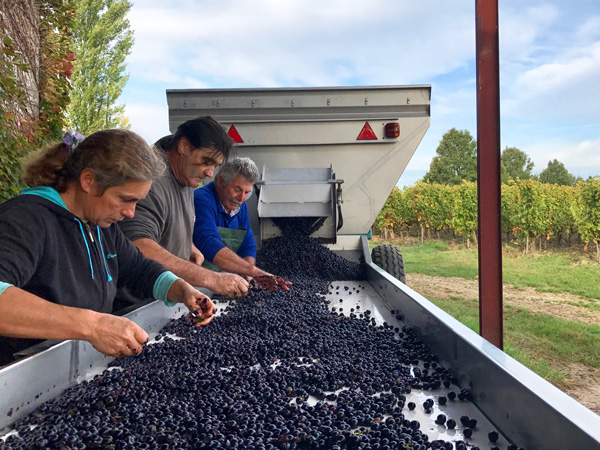 It's good news and bad news on the wine front. If you've read our previous missives, the bad part will come as no surprise. After the late April frost (search ’frost’ on gavinquinney.com), we said we’d lost about half the crop, and it just so happens that we've actually produced half the amount of white that we made last year, albeit 2016 was a bumper vintage. The good news is that the quality is very good, although we’ll have to wait and see as to what will go into the final wine, as we can be quite fussy about that.

It's our smallest harvest since 2008 (search, um, ’frost’ on gavinquinney.com), and back then we had just planted 13 acres with 30,000 young Sauvignon Blanc vines which weren't yet in production. Incidentally, one reason that our 2017 is lower than our hail-hit vintages of 2009 and 2013 is that hail (search ’hail’ on gavinquinney.com) is very localised, so it was possible to find other good vineyards to lease on a short term contract: leasing another vineyard - not simply buying grapes - enabled us to include the grapes in our ’Château’ wine. With Bordeaux losing up to half its crop in 2017, finding another good quality vineyard is a different matter altogether.

Here are two photos of the same row of Sauvignon Blanc near the Château, on the day it was harvested on 11 September, which help explain the 50/50 business. At the top of the slope, plenty of healthy looking bunches. At the foot of the same row, looking up - rod all. 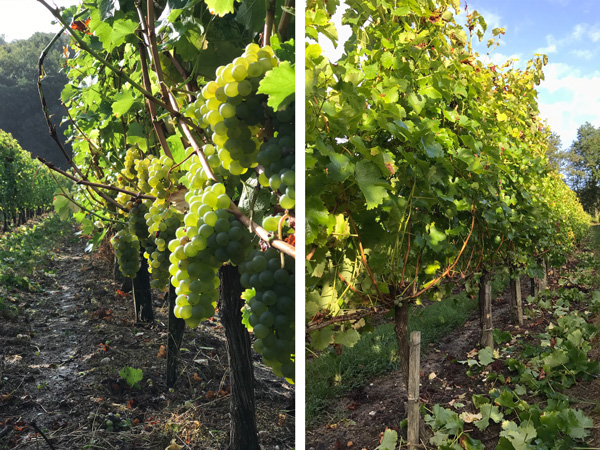 It was simply a few degrees colder down there that morning of 27 April and the tiny shoots and buds were nobbled by the frost. And as we haven't had a frost like this since 1991, along with thousands of other growers, we're not insured. Here is that same block being harvested: 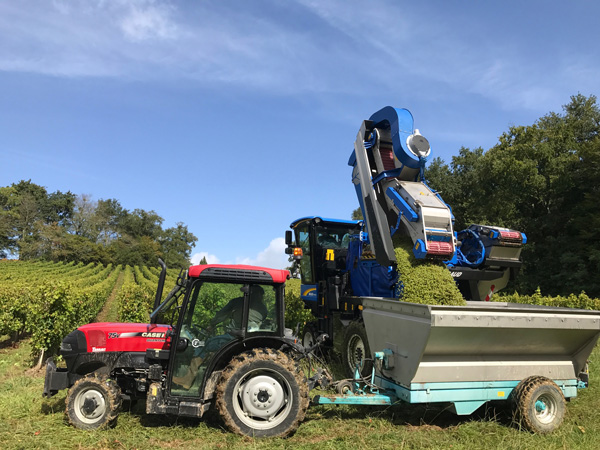 The white harvest began before dawn on Friday 8th September, and the last day was the 13th. The red harvest began on a Friday too, on the 22nd. I don't think we've ever started a harvest on a Friday before, and certainly not both the white and the red, but perhaps it's been that type of year. What was also odd was that for both of the subsequent weekends we had lots of people coming to stay, so it was all go.

As with the whites, there's quality but not quantity for the reds. The vines on the plateau surrounding the chateau were untouched by the spring frost, and yields there of the Merlot and Cabernets are around normal. The rows on the picturesque slopes shown in the header picture above were not so lucky. As a comparison with the plentiful 2016 vintage, here are two views of the same vines just before harvest in 2016 and again in 2017. Note these pics were taken at the same stage, before the respective harvests. 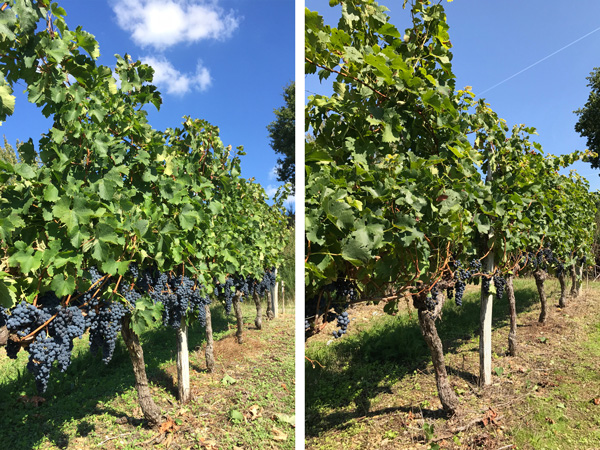 On these frost-damaged slopes, the ripeness up and down the rows was pretty uneven, so we're making rosé with the lot. So far, the pale pink juice from here and from two other parcels tastes really good - a mix of Merlot, Cabernet Sauvignon and Cabernet Franc. 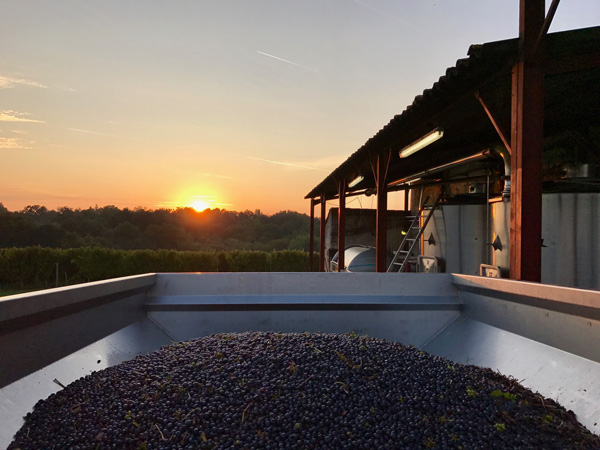 We finished harvesting the Merlot on Thursday, and the last of the Cabernet Sauvignon should be in late next week. We've experimented with a different machine with an onboard sorting system with the catchy name OptiGrape. Here are views from this clever but scary piece of kit. 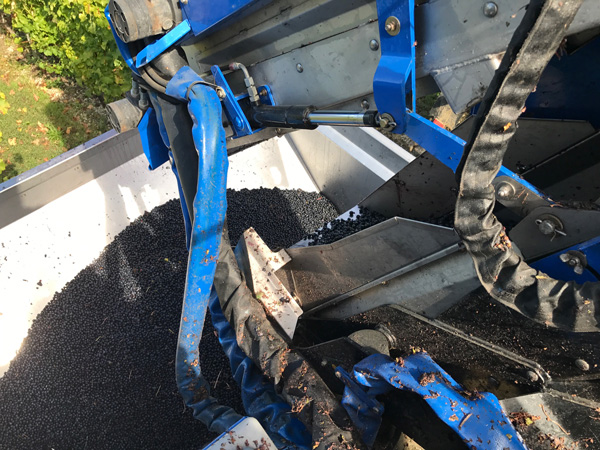 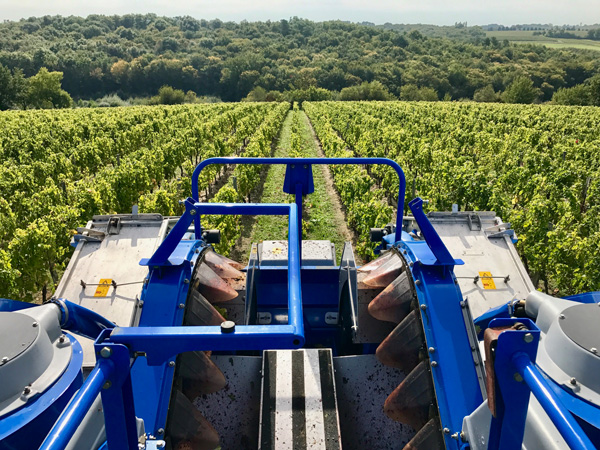 I'll be writing up the 2017 harvest across the Bordeaux region in due course, and will forward that on.

Before signing off, here are some photos of three different September weekend events that kept us busy:

Lunch for the Commanderie de Bordeaux from Zurich. More photos on Facebook. 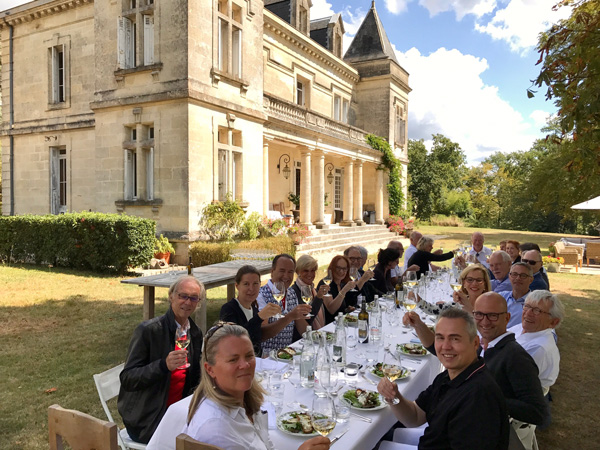 Right: Anniversary weekend for sister Rosanagh and her husband Dominic. 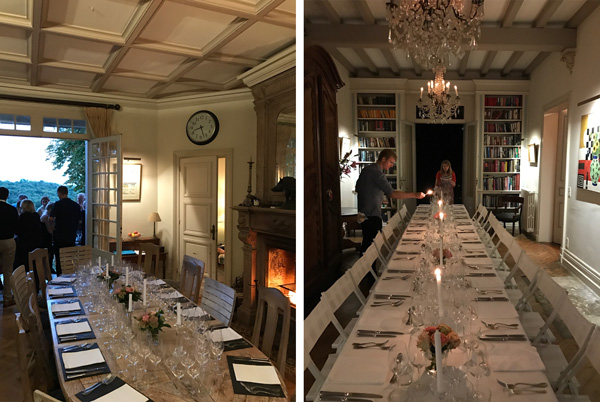 In the meantime, it's back to the winery to taste the fermenting juice.