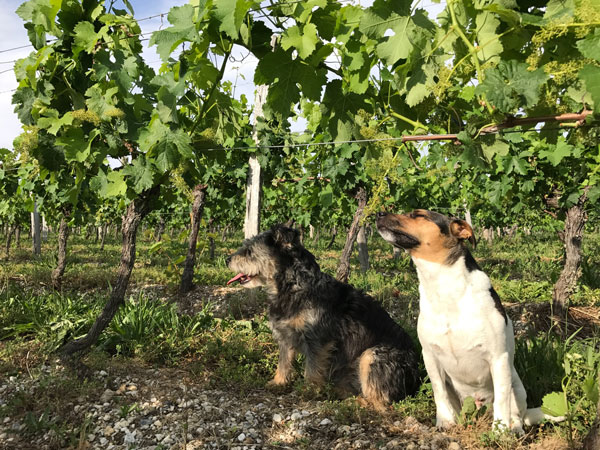 May has been a month of highs and lows, and that's before we even think about the vineyard.

Yet we've done a lot of venturing into the vines, at Bauduc and beyond. As you can see below, it’s shaping up to be a most unusual year. The crucial flowering - that's Pavie, above, sniffing a bunch of flowering Merlot last night - is taking place right now.

The frost map of Bordeaux 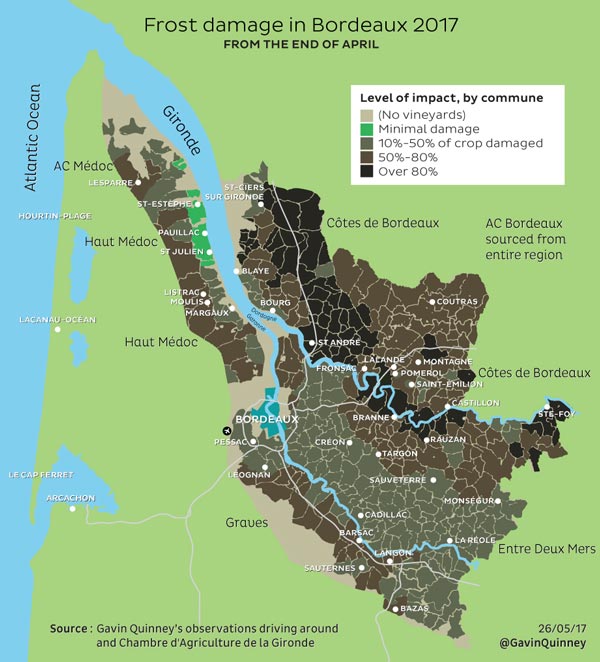 As wine maps go, this isn't the jolliest. The overnight frosts that swept through Bordeaux at the end of April 2017 were devastating for some vineyards but not for others, so - given the conflicting reports about price rises and chateaux ’holding back stock’ - I thought a map showing the levels of impact in different areas would help provide a clearer picture.

As I mentioned a week after the worst of the frosts, we lost about 50% of our potential harvest at Château Bauduc (near Créon on the map), comprising most of the lower slopes of our 25-hectare/63-acre vineyard. That's bad enough, but it was worse elsewhere: I drive our 13 year-old Tom to his college in Libourne most mornings, and many of his schoolmates come from wine-growing families - two in the Entre Deux Mers, another in Montagne St-Emilion, and others in Fronsac and Saint Emilion. All have vineyards which have lost close to 100%.

’Modern but with an air of rural’ 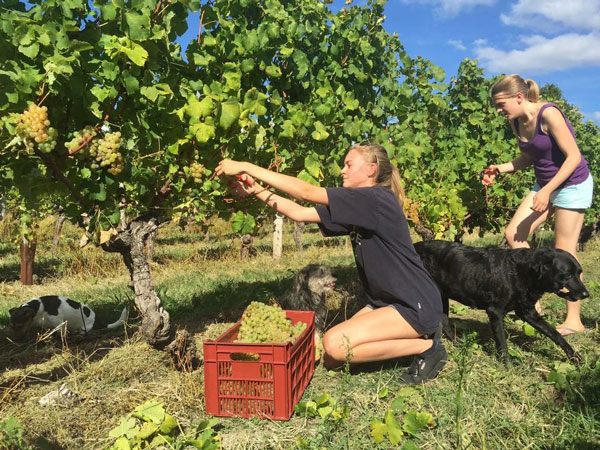 You can find the excellent, brand new ’The Wine Dine Dictionary’ by Victoria Moore, the wine critic for the Daily Telegraph, on the best seller shelf at all good bookshops and Amazon. In the meantime, we loved her recent comment for our 2016 white:

“Pitch-perfect sauvignon blanc. Crisp. Not shouty. Modern but with an air of rural. Very very moreish. Now I just need a sunnier roof terrace to drink it on. Where can we buy it, you are asking. Answer: it's one of those ’in the know’ wines people buy direct. £11 a bottle from bauduc.com. Or book a table at Rick Stein’s where it's the house white… ’

When we wrote to say thanks, Victoria replied:
“It is the most perfect wine. I feel like a specialist in £10 wines as I taste so many of them, and it hits exactly the beautiful spot. I love love loved it. And say any of that if you want.” Oh, alright then.

Rural, part 2: ’What to drink’ in Country Life 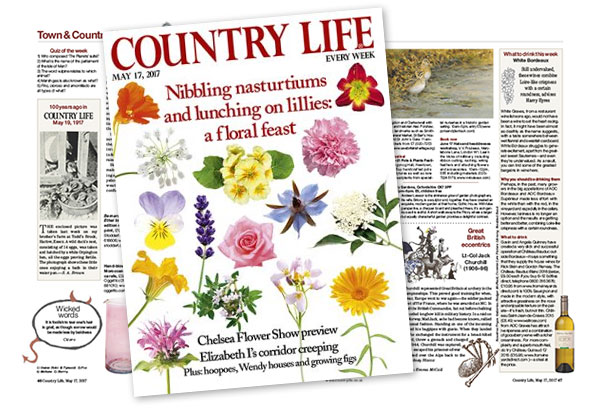 Gavin and Angela Quinney have created a very slick and successful operation at Château Bauduc outside Bordeaux - it says something that they supply the house wines for Rick Stein and Gordon Ramsay. The Château Bauduc blanc 2016 is 100% Sauvignon and made in the modern style, with attractive grassiness on the nose and enjoyable texture on the palate - it’s fresh but not thin."

Wine and Brexit at the London Wine Fair 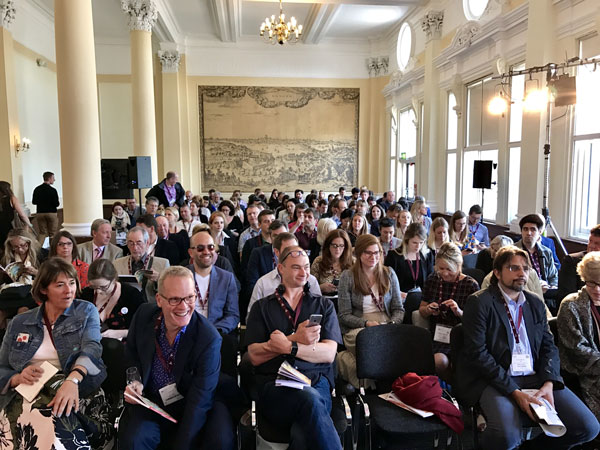 I was delighted to be invited to speak on a panel of industry experts on the thorny subject of ’Wine and Brexit’ at the London Wine Fair last week. It is one of the hot topics of the wine trade today, unsurprisingly, and it was standing room only at the event - I took this photo from the stage before the room filled to bursting. I’ll cover the subject in more detail anon but Jancis Robinson, for whom I write regular Bordeaux vintage updates, was in the audience and her article is well worth a read. (Free for subscribers today, non-members 1 June.)

Jancis Robinson on Wine and Brexit 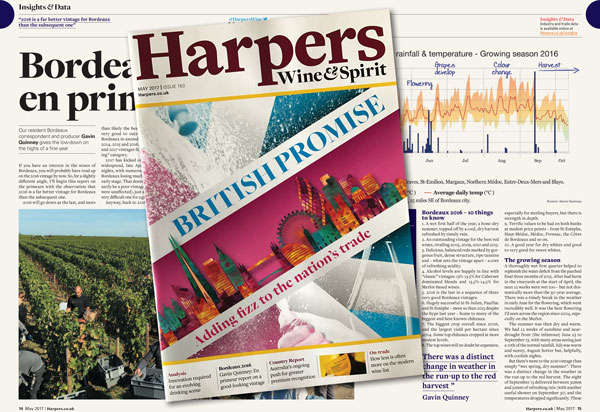 The Bordeaux 2016 ’en primeur’ machine marches relentlessly on. (Lordy, I've been to nine Chelsea matches since the official week of tastings began in Bordeaux at the start of April, and there's still no end in sight.) Here's a link to a copy of my Bordeaux 2016 report for Harpers, the UK trade magazine, including my favourite 100 red wines. You can find many of my scores tabled alongside other critics on Liv-ex, the London International Vintners exchange, here. 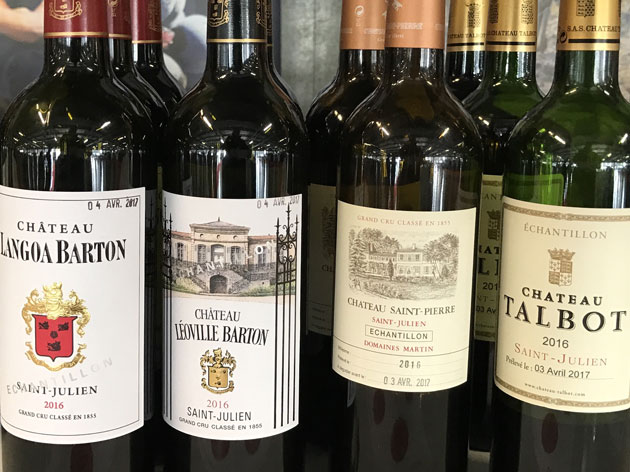 As they say, the wines that are really in demand you can't get hold of, and the wines that are available no one wants to buy. However, there are some delicious wines that are affordable - and available - which are certainly worth a punt. Steven Spurrier, the hugely respected writer and critic for Decanter who retired from judging the primeurs earlier this year, told me that he didn't buy wines that cost more than £500 a case (of 12) en primeur/in bond (ie excluding duty and VAT) because he didn't have any friends who'd appreciate them.

So, with Steven’s words in mind and based on prices so far, here are my thoughts for a balanced selection of 2016s.

Farewell to a top dog 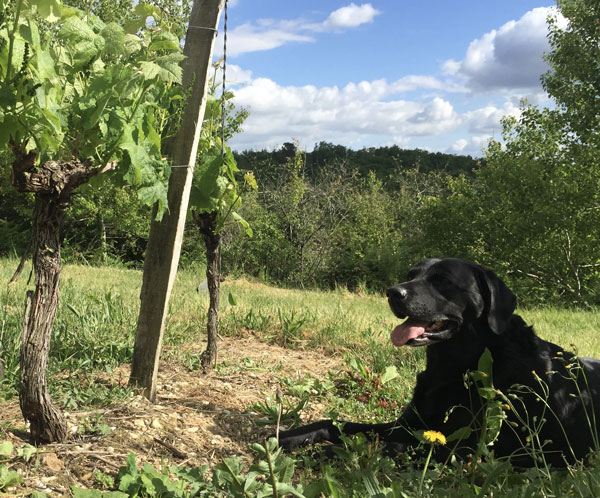 We had to say goodbye to our lovely labrador, Palmer. He was only 11 but was diagnosed with cancer and, as he was increasingly frail, we had to weigh up the options. Following advice, we had him peacefully put to sleep one Friday evening after the children (except Georgie, sadly, in London) had had a chance to say goodbye. Angela, brave Tom, and I stayed with him to the end. A part of us has gone and we shall miss him terribly, as will family and friends - and, of course, Margaux and Pavie. But we shouldn't be too sad - he had a fun, outdoor life, he was much loved, and didn't suffer at the end. When we came back from the vets, there was a rainbow over the vineyard. We will no doubt bury his ashes next to Barton, his first playmate a decade or so ago.