The end of May, if you’ll forgive the cliché. Whatever next?

June, you say, and a fair amount of sport still. It’s also an important few weeks ahead in the vineyard as the vines have just started flowering, and this unspectacular yet critical period can potentially make or break a wine grower as it plays a huge part in determining the yield. A poor flowering and you won’t get decent bunches.

The forecast isn’t bad - a scorcher this weekend - and we’ll report back on how it all goes, and do follow us on the social media links at the foot to keep up to speed on such exciting news. In the meantime here’s a review of a few things that happened this month.

That £4,500 bottle of Bordeaux served by mistake 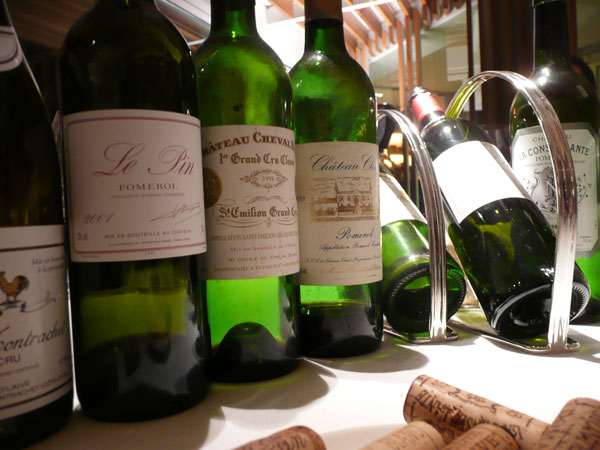 If we had a pound for the number of times this will be mentioned by visitors this summer, we’ll be able to buy a bottle. Well, maybe a half. Here’s a quick recap of this cracking story that went around the world, and a brief look at how that bottle of Le Pin 2001 ended up being quite so expensive on the wine list in Manchester. Funnily enough, I was treated by some generous, wine-loving friends at a famous restaurant in northern Spain some ten years ago, and spotted the exact same wine on the list. “Wow!” I said. “They’ve got Le Pin ‘01 on the list for €600. The trade price, if you can find a bottle, is three times that.”

Late spring frosts and the luck of the draw 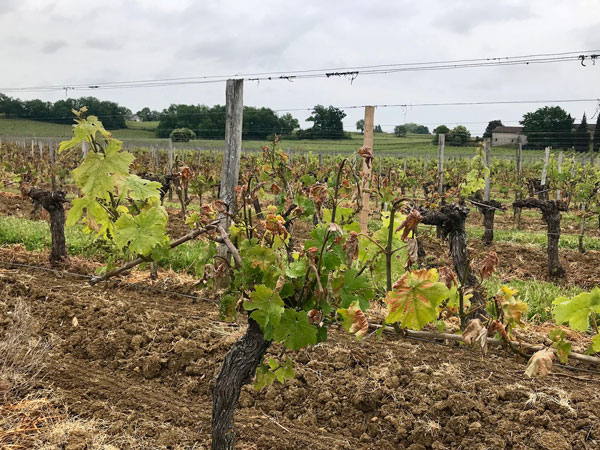 Late spring frosts in May are extremely rare in Bordeaux but there were some icy mornings on the weekend of the 5th to 7th May. Some friends here lost the crop from a parcel or two of vines, and although the damage was bad in some spots it was not nearly as widespread as the devastating frost at the end of April 2017. We were spared, fortunately. This May 2019 frost came on top of the frost in mid-April across various parts of France. Our picture above is of damage in Montagne Saint-Emilion, taken 17th May, while the eye-catching images below of anti-frost candles in April are from Edouard Moueix in Pomerol, and an aerial pic of Chassagne Montrachet in Burgundy, by the impressively-named vigneron, Vincent Dancer. 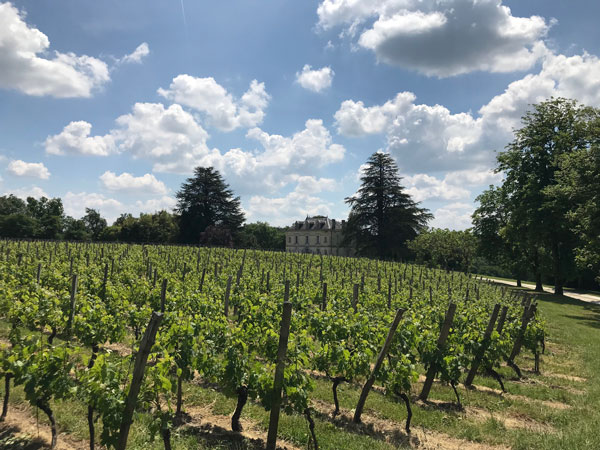 We’ve taken a picture of the Merlot vines in front of the Château on the 23rd May each year. This one was taken on the 22nd because it was so grey and rainy the following day, but it shows how it compares to previous years. The odd thing is how some vintages are completely different to others. The early budding and growing season of 2011, compared to the late one of 2013, and the hail damaged crop of 2009. Touch wood, so far so good for 2019.

Château-bottled isn’t what it used to be 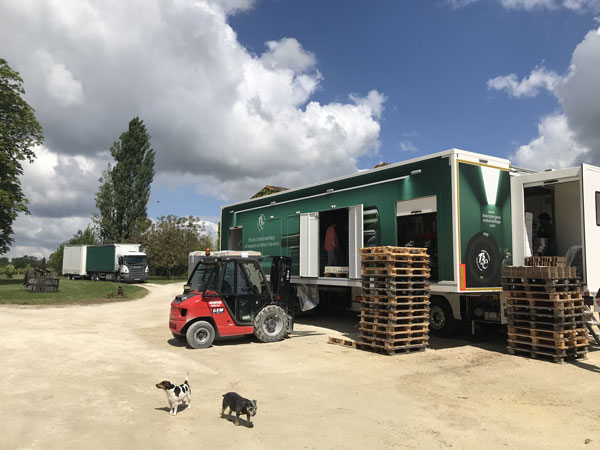 We’ve been bottling again this month, bringing in the same contractor but using an even smarter machine than before. This one comes in at over a million euros on the back of a truck, according to Thierry Bergeon who wrote the cheque. He’s the bottling guy and the logistics partner for many of Bordeaux’s leading châteaux. And us. 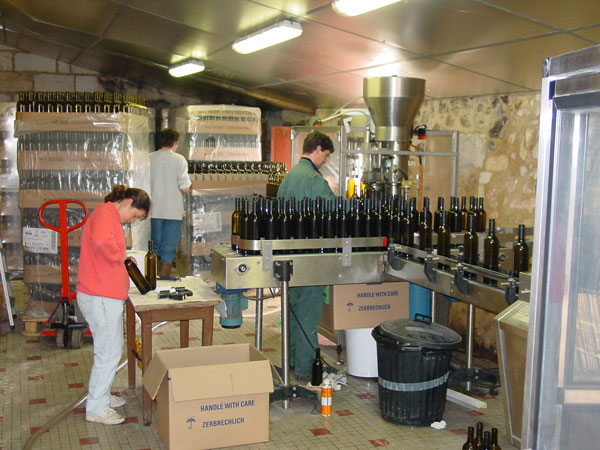 It’s hard to know whether that’s a good thing (quality) or a bad one (cost). One thing for sure is that we do things differently to the early days. Here we are putting corks and screwcaps on our 2002 whites and rosés in 2003 - screwcaps being almost unheard of in Bordeaux back then. Even now, only two of Thierry’s 18 machines and teams for hire handle screwcaps, the rest all cork only. And just look how times have changed with the colour of that Rosé. 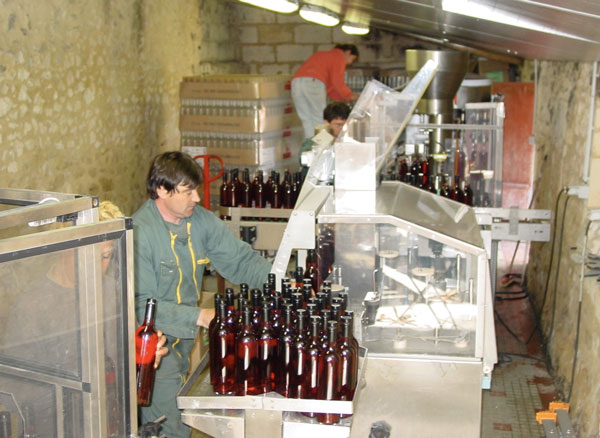 Ten years on and those two May hailstorms 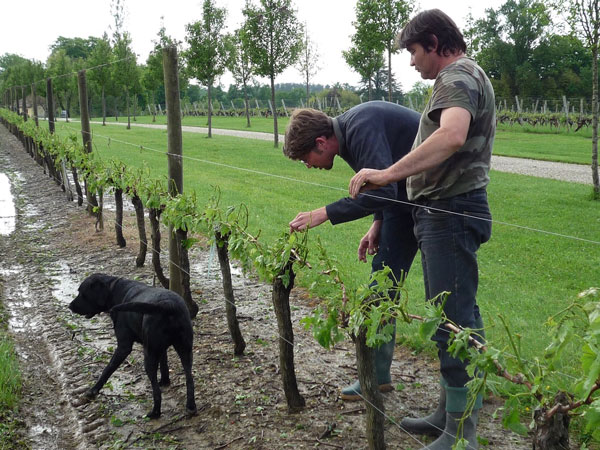 Ten years ago but it’s still in fresh in the memory. 2009 turned out to be one of the great Bordeaux vintages for reds (okay, so 2010 and 2016 and now, arguably, 2018 would sit alongside it) but for us it was close to disaster with not one but two hailstorms in May. The vines that didn’t get clobbered on the 13th May were whacked on the 25th.

This was Daniel on 13 May, and Georgie and Amelia handling more weapons of destruction on 25 May. With Daniel again - hard to picture a more despondent vineyard manager. 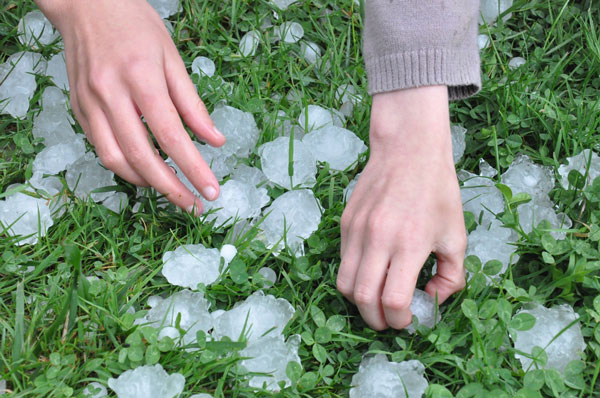 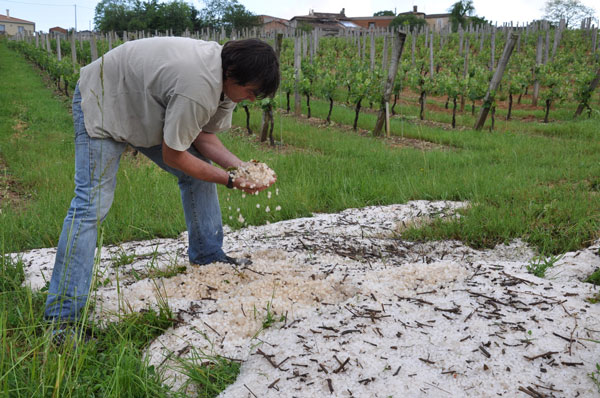 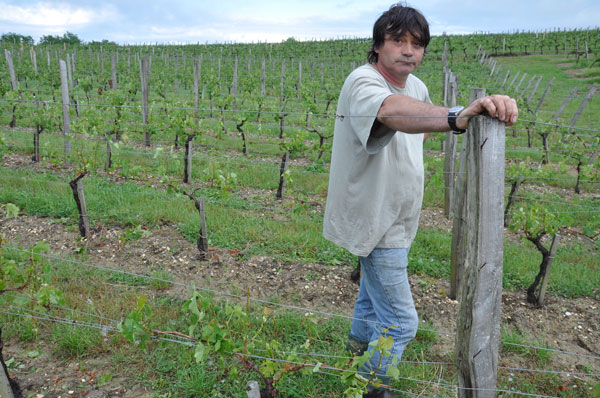