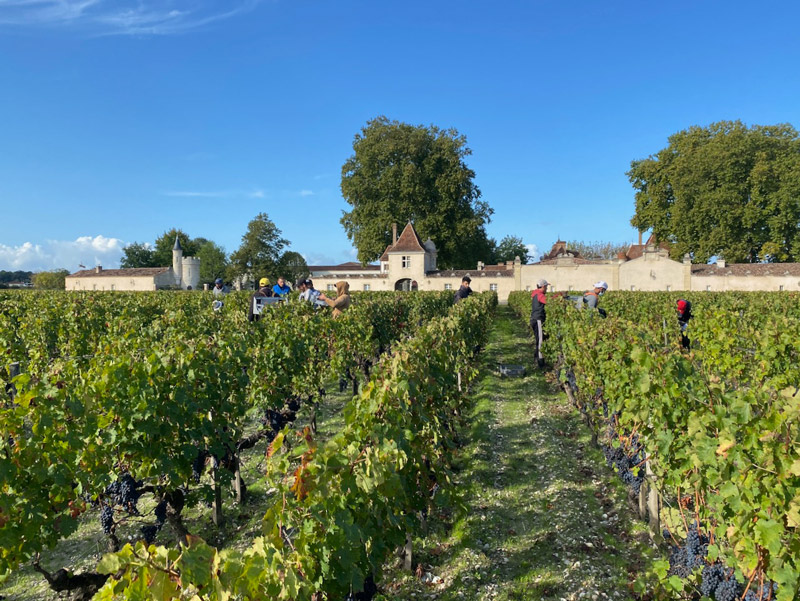 This month's missive focuses on the 2021 vintage in Bordeaux, given that hundreds of professionals have just descended on the region to taste the new, more expensive wines which will go on sale from wine merchants as 'Bordeaux 2021 en primeur' from May onwards. In other words, the top end wines are offered for sale some time before they're bottled and shipped: as 'futures' as they're referred to in the US.

Most critics reckon it's an excellent vintage for the white wines of Bordeaux, while a mixed bag for the reds. Bordeaux production is always around 85% red, 5% rosé and 10% white, with those finer wines being sold en primeur representing considerably less than 10% of the output.

The fairly chunky, data-rich weather and crop report below goes a little way to showing how the challenging growing season impacted on the quality and quantity of Bordeaux 2021.

You’re not obliged to read all this geekery of course but here’s a link to the report for future reference.

It is not, of course, a sales pitch. (We don't sell either our wine or anyone else's en primeur.)

As a general rule this vintage, if you follow a particular Château it’s probably worth buying their 2021 to keep a collection complete, assuming the price is reasonable, but it’s not really a vintage to dive into if you’re new to the 'en primeur' game - or if you already left the party some time ago. (Except that is for Pessac-Léognan dry whites. Can’t go wrong.) Alternatively, follow the critics and merchants who have earned your trust.

Given the small size of the crop in Bordeaux last year, it feels fairly extraordinary to have actually had healthy yields and to have made a lot more wine that we could have imagined soon after the frost last April. More on that anon. 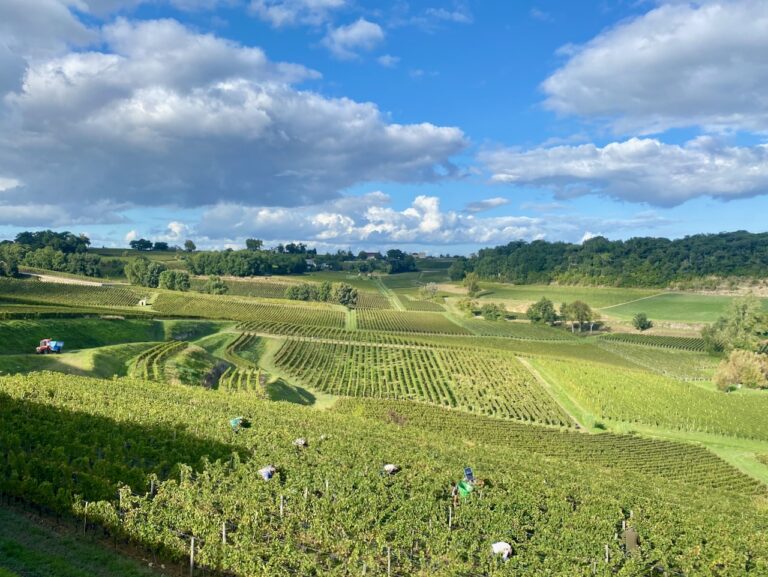 Bordeaux welcomed professionals from the world of fine wine – for the first time in three years – for the spring tastings of the latest vintage at the end of April. As the ‘en primeur’ tastings of young samples by critics, commentators and merchants confirmed, 2021 is a comparatively weaker and uneven vintage for reds, even if very good for the whites which are made in much smaller volumes.

Here’s my report of how the weather during the Bordeaux growing season left a fairly indelible mark on the style of the wines and the volumes produced.

The handsome French word hétérogénéité springs to mind – no less than five acute accents and one that sums up Bordeaux 2021 – for the growing season, the crop and the resulting wines. Heterogeneity – ‘the quality or state of being diverse in character or content.’

It may be worth taking a look at the size of the overall crop in 2021 as a starting point. 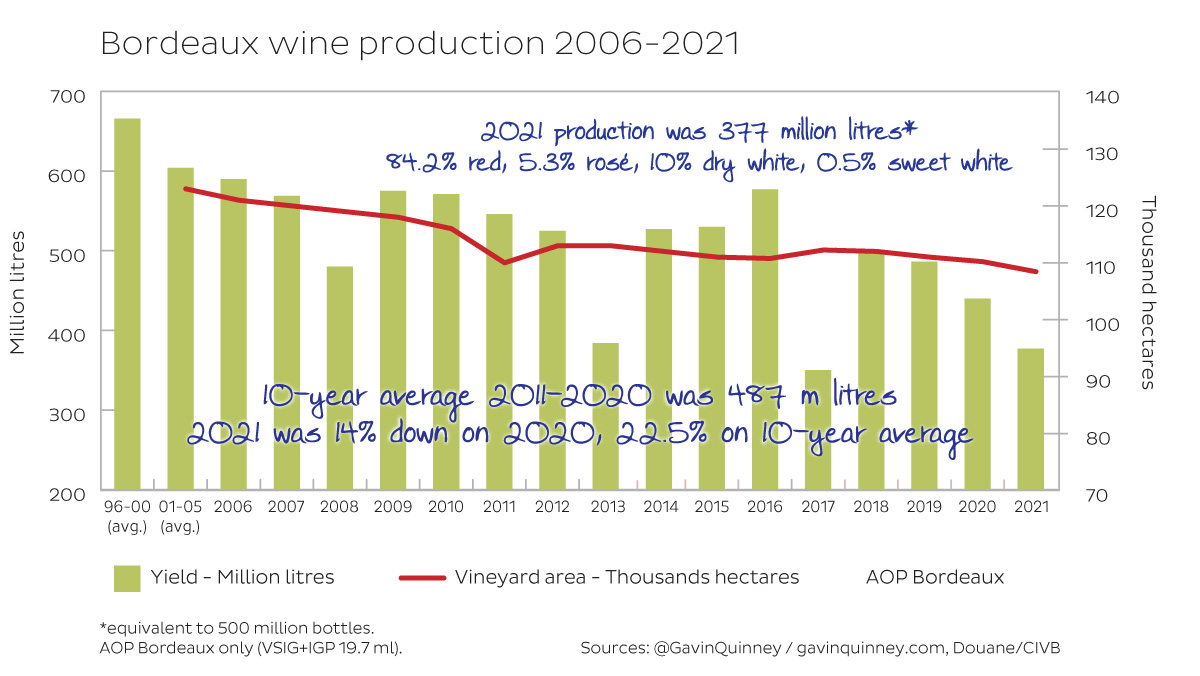 Here are the 5-year production averages for Bordeaux, by the way:

The growing season for Bordeaux 2021 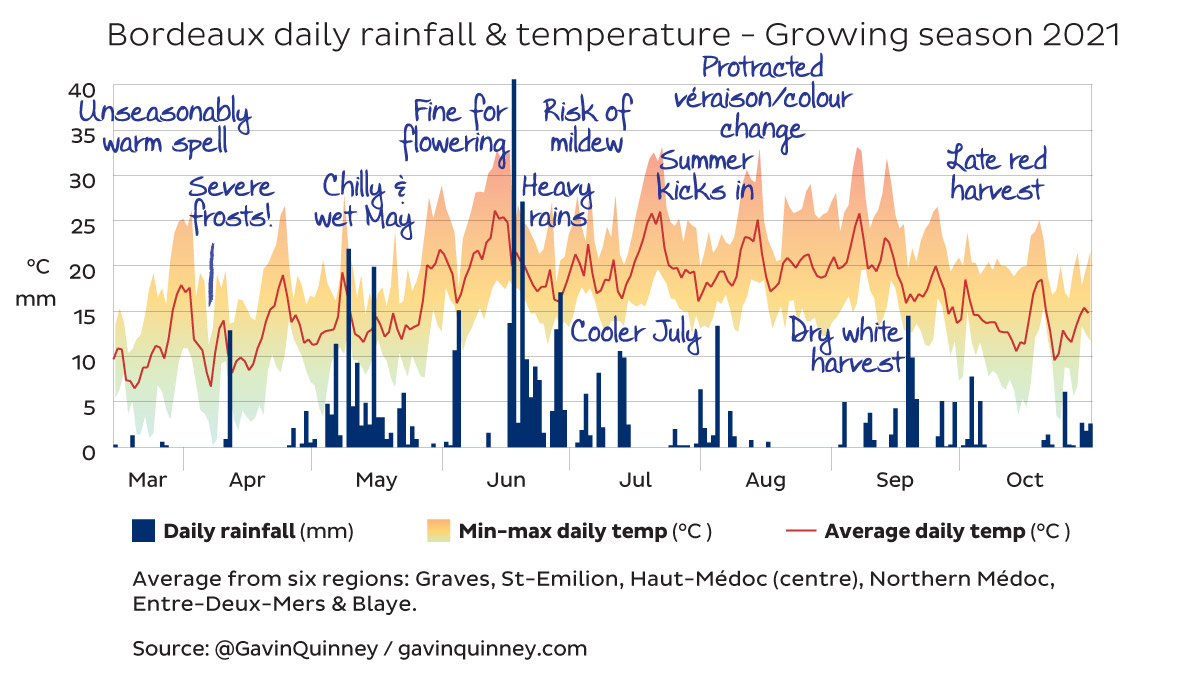 This is a chart I’ve put together each year since the 2016 vintage, taking the data from six sub-regions of Bordeaux to get a more representative picture of the vintage. You can see how the different vintages compare at the foot of this piece in the appendix.

I’ve included March and October for 2021, unusually, bookended onto the key six months of the growing season from April to September. That’s because the dry and warm spell at the end of March and early April spurred on the bud-break just before the April frost, and at the other end the red harvest took place mostly in the first fortnight of October. 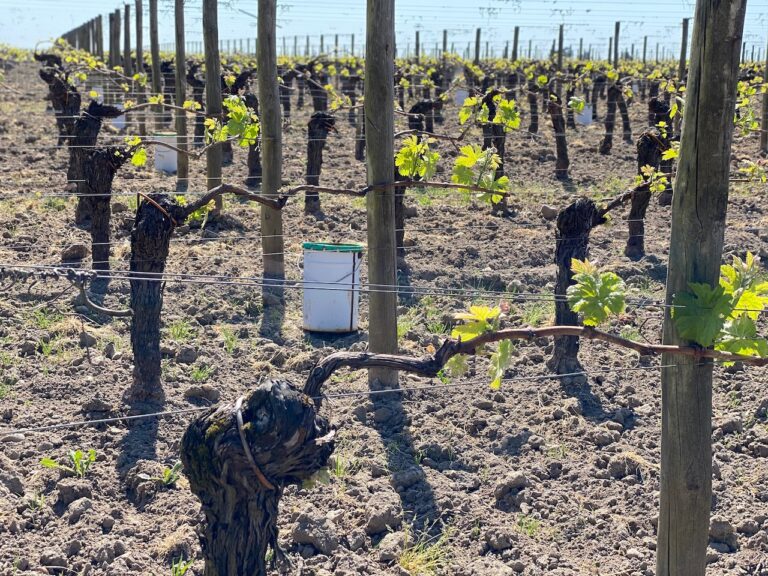 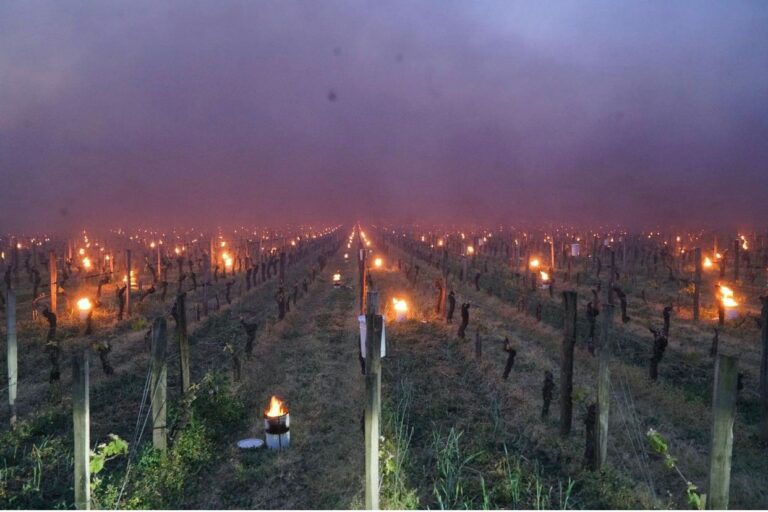 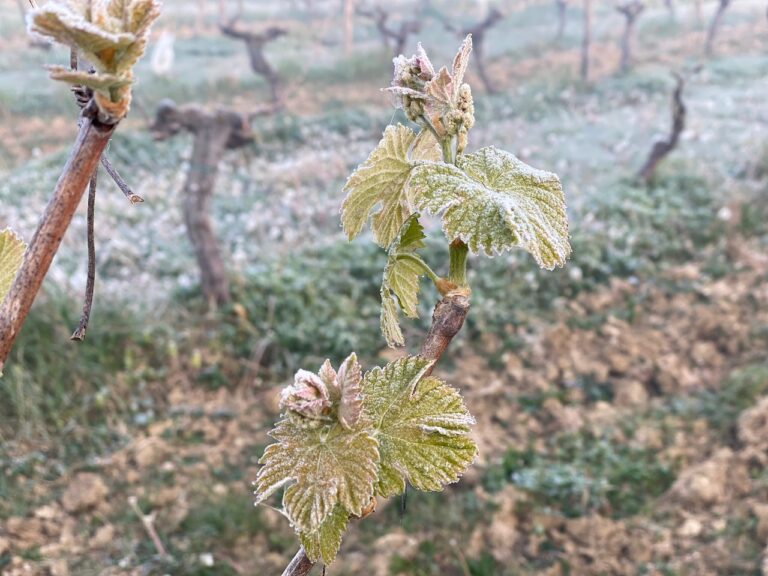 Another neighbour’s Merlot, which did not escape the frost of 7 April. The whole parcel was lost for the year. The frost of early April 2021 follows on from the severe frost across Bordeaux in late April 2017, with damage throughout much of the region. Barsac, Sauternes, the Graves and parts of the right bank were particularly badly hit in 2021. See below for a detailed map.

Note the scribbled text in the graphic above for some of the most significant events through the season. There isn’t room for some important bits, like the fact that we need the vines to feel some water stress after flowering and fruit set – in late June/July – so that they concentrate on producing quality fruit. Heavy rains in the second half of June didn’t help, as well as creating dangerous conditions for the spread of mildew.

Below is the impact of mildew on (a neighbour’s) bunches in the summer. 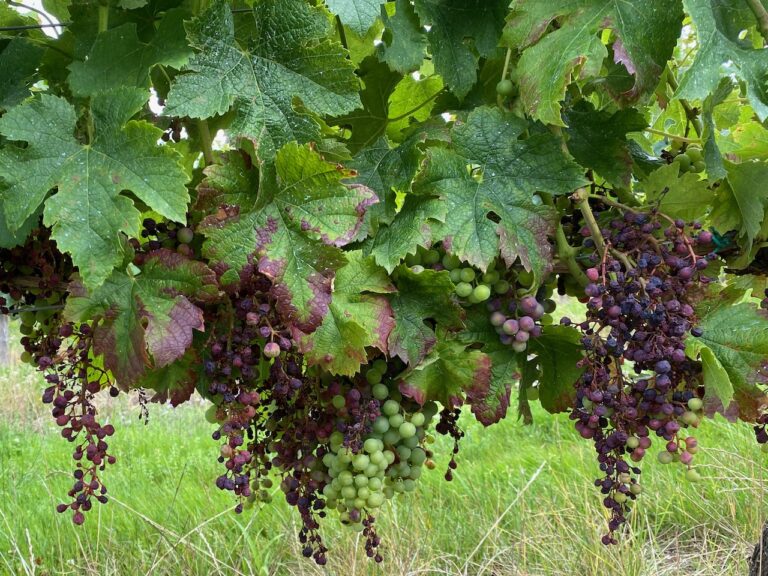 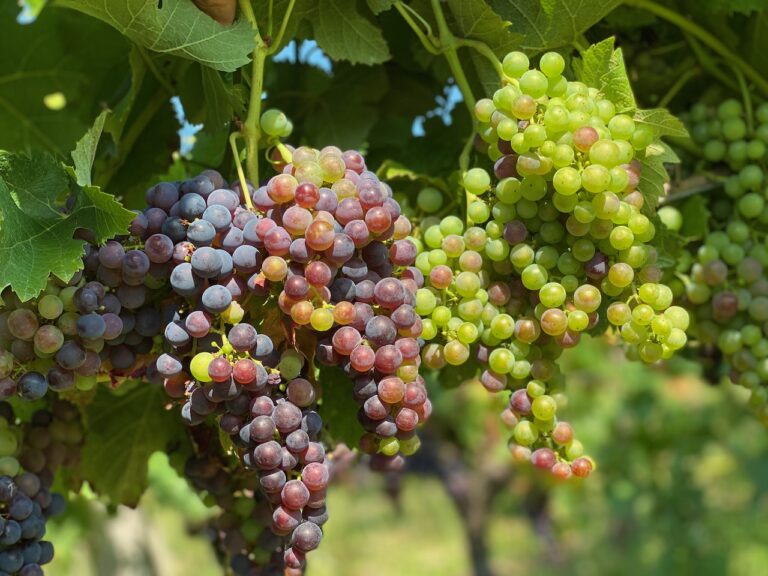 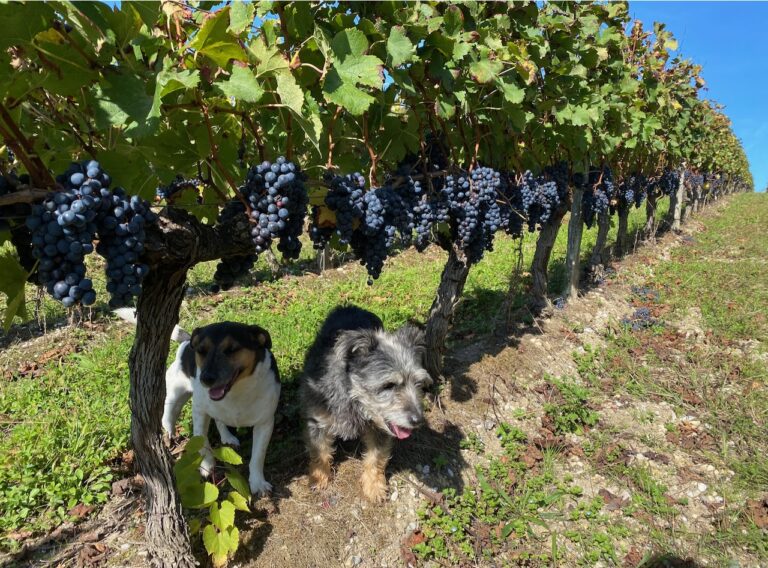 But it wasn’t all bad. 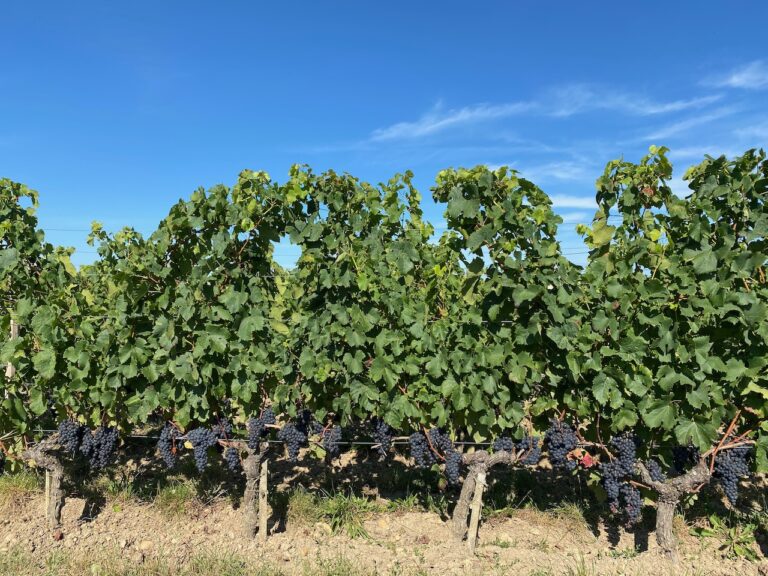 Yields varied enormously from one vineyard to another. 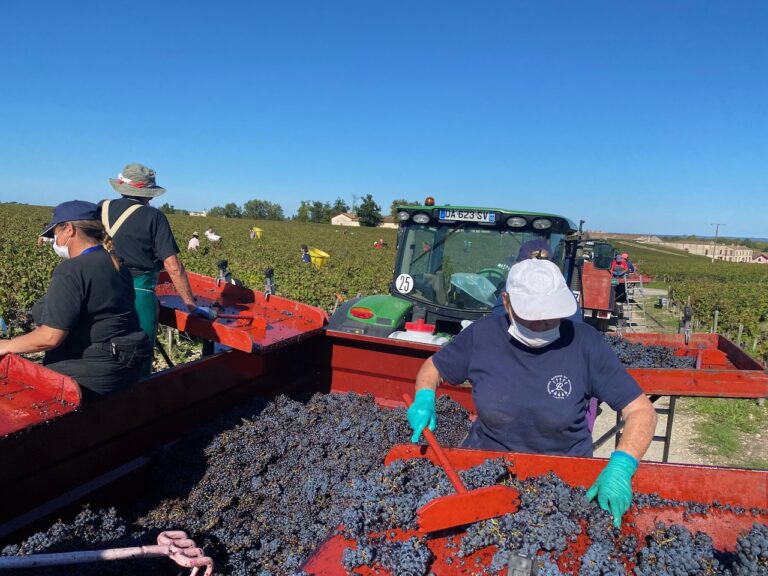 Comparing 2021 rain and temperatures with the average 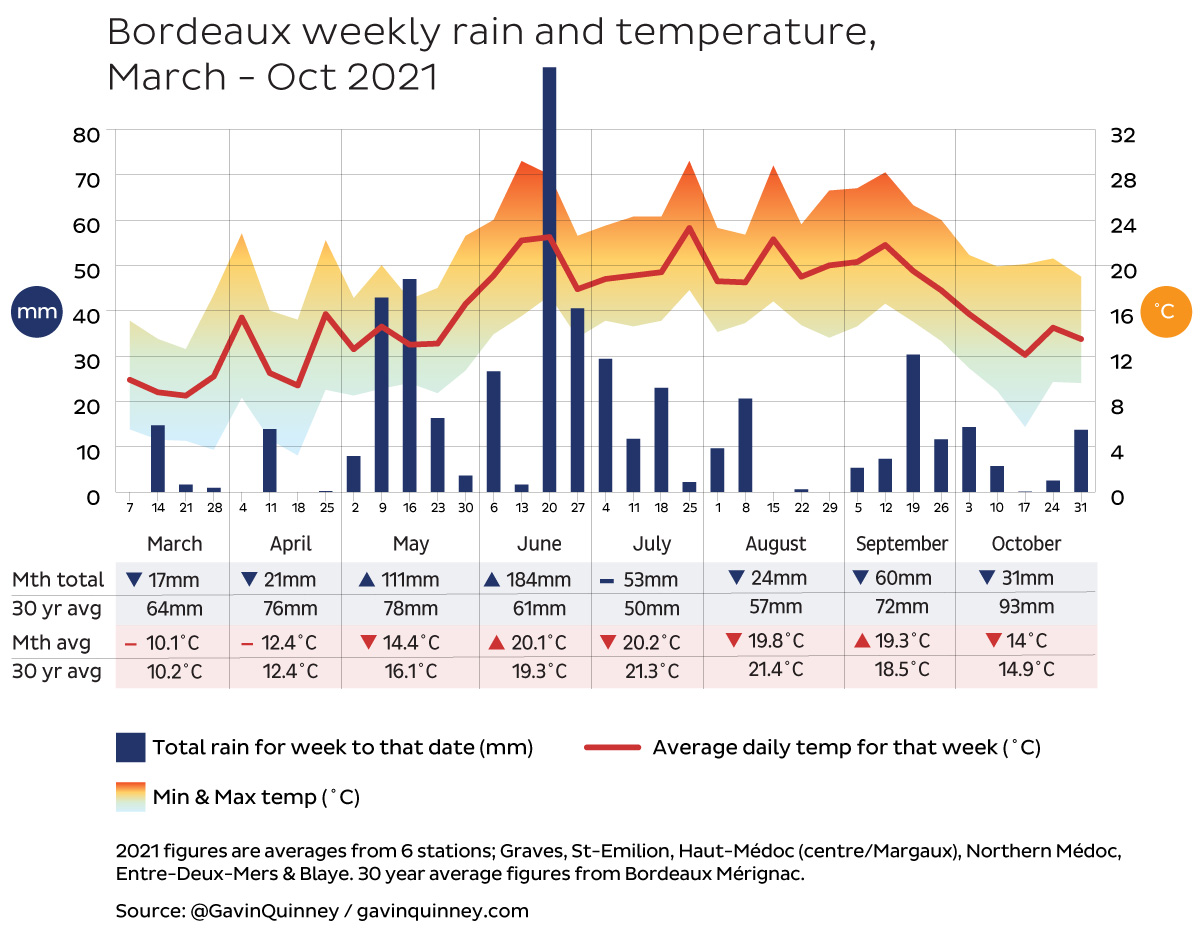 This graphic showing the weekly figures also provides a useful comparison with the average monthly stats. After a wet December, January and February saw 108mm and 99mm of rain respectively and Bordeaux then had a dry March and April. After the early frost had slowed things down, May was colder than normal, and wetter. June was warmer thanks to some fine weather during the flowering period before the heavy rains. July and August were comparatively cool before a late summer surge in the first half of September.

The dry whites were harvested in good conditions in September after a dry August which, conveniently for white grapes, wasn’t too hot. 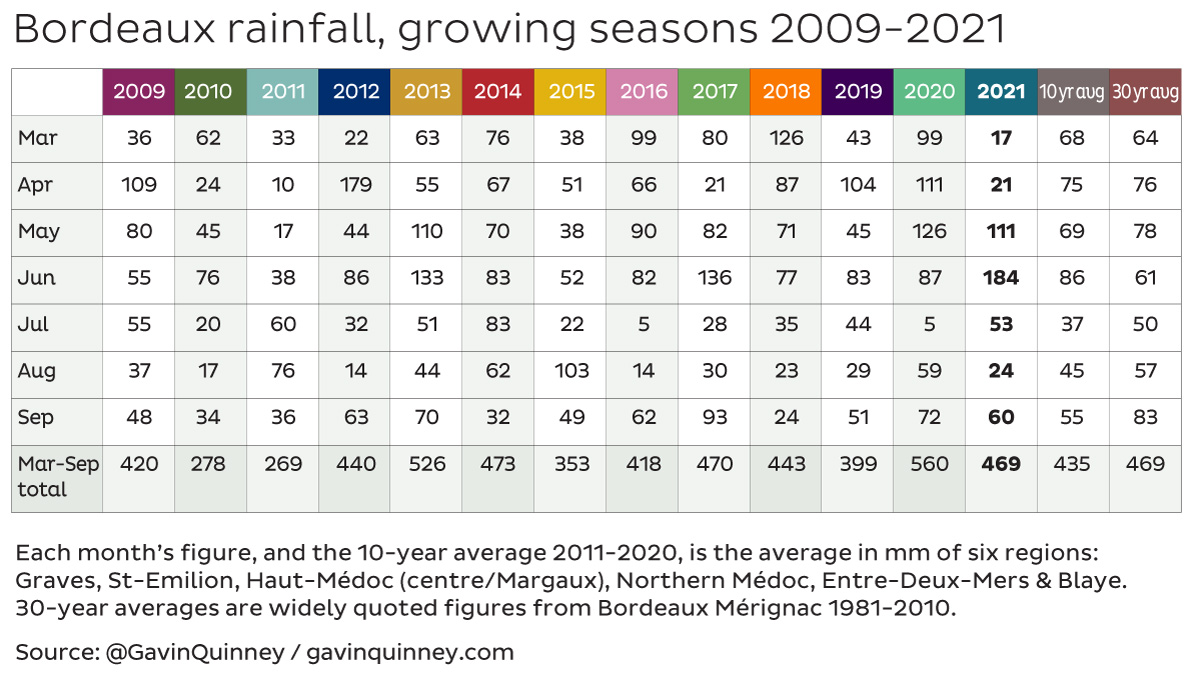 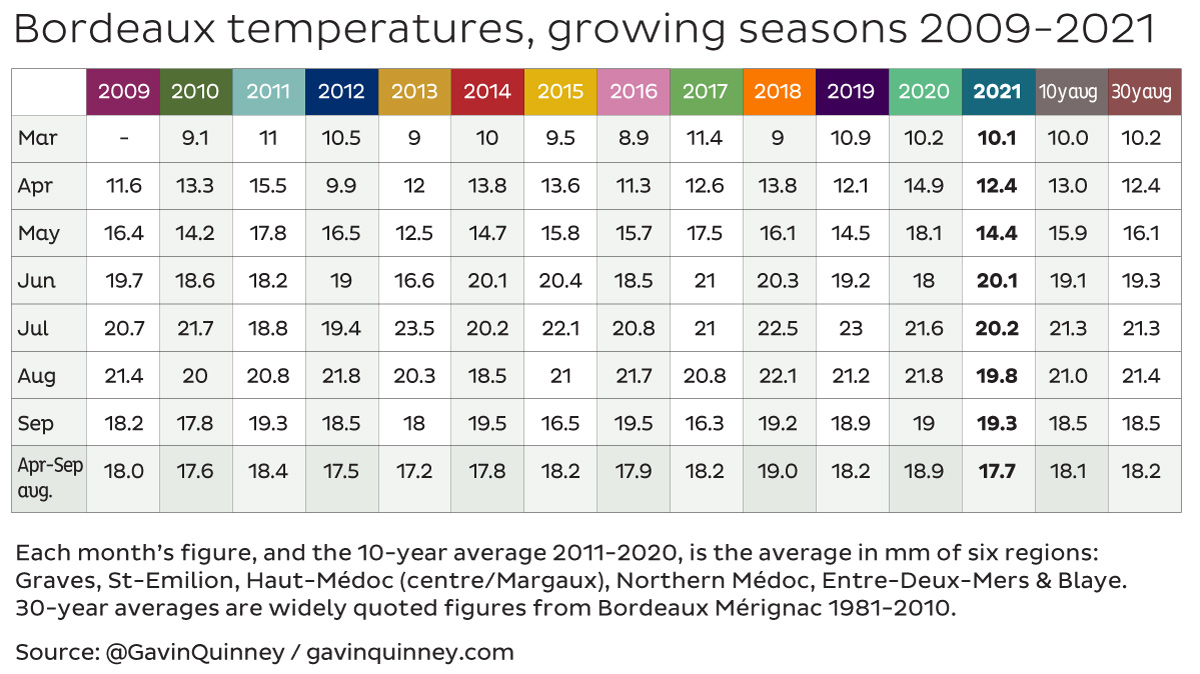 As you can see, 2021 was cooler overall, notably in July and August but also in May. Thankfully September was warmer and crucial for the final ripening of the grapes. 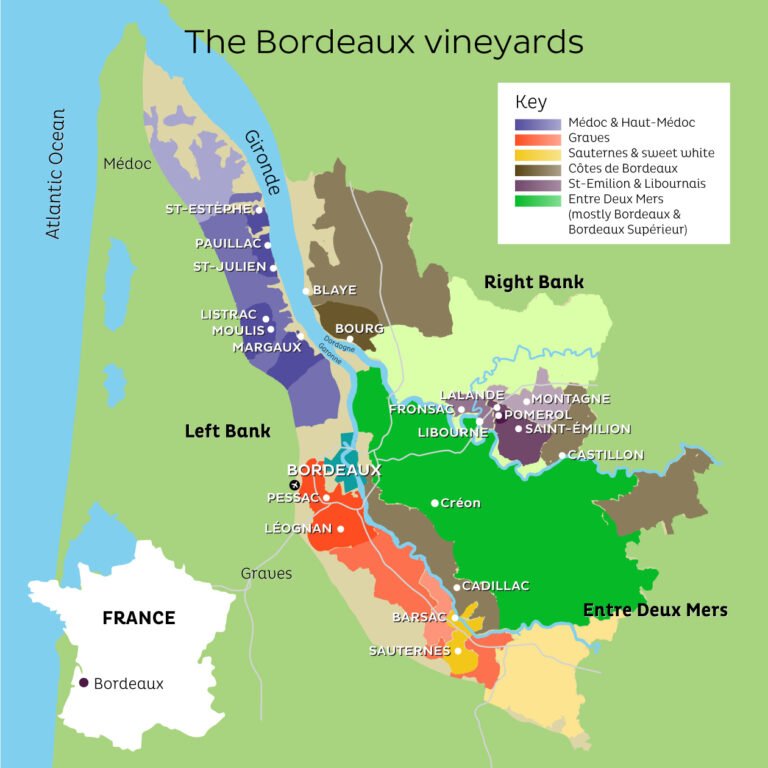 As a lot of appellation names follow, it’s useful to have a map. (We’re based near Créon by the way, south east of the city of Bordeaux.)

Production split by Appellation group in 2021 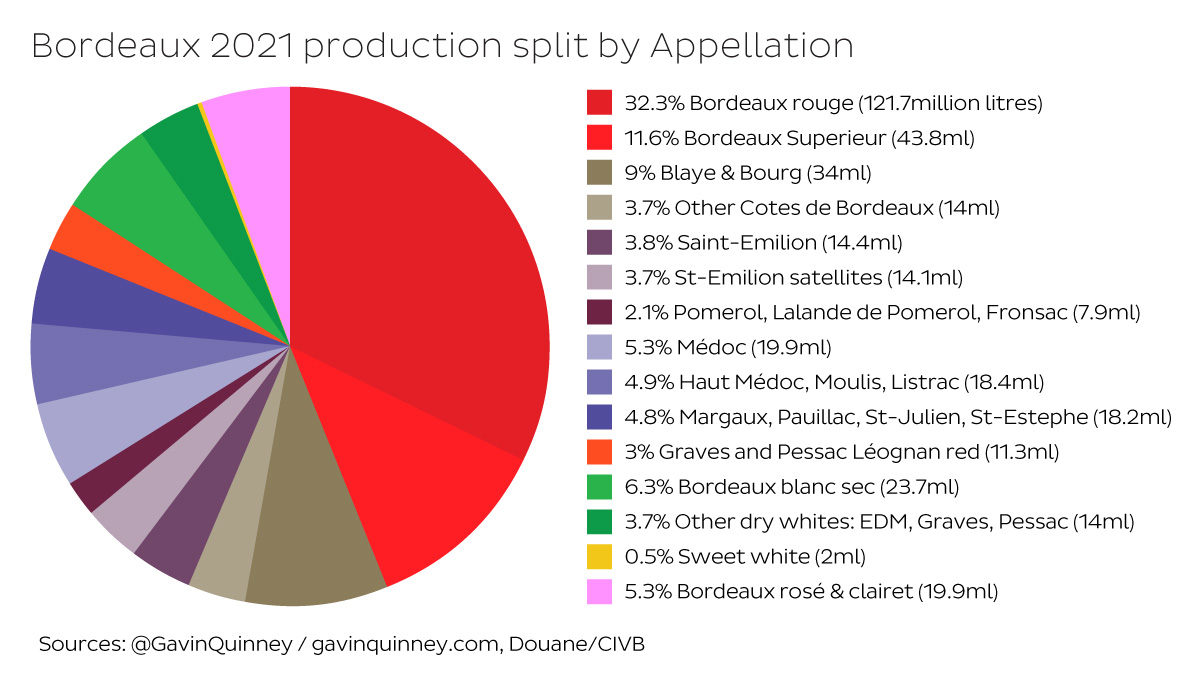 In volume terms, well over half of the production comes from the generic Bordeaux red appellations and the Côtes de Bordeaux.

Low yields for most Appellation groups in 2021 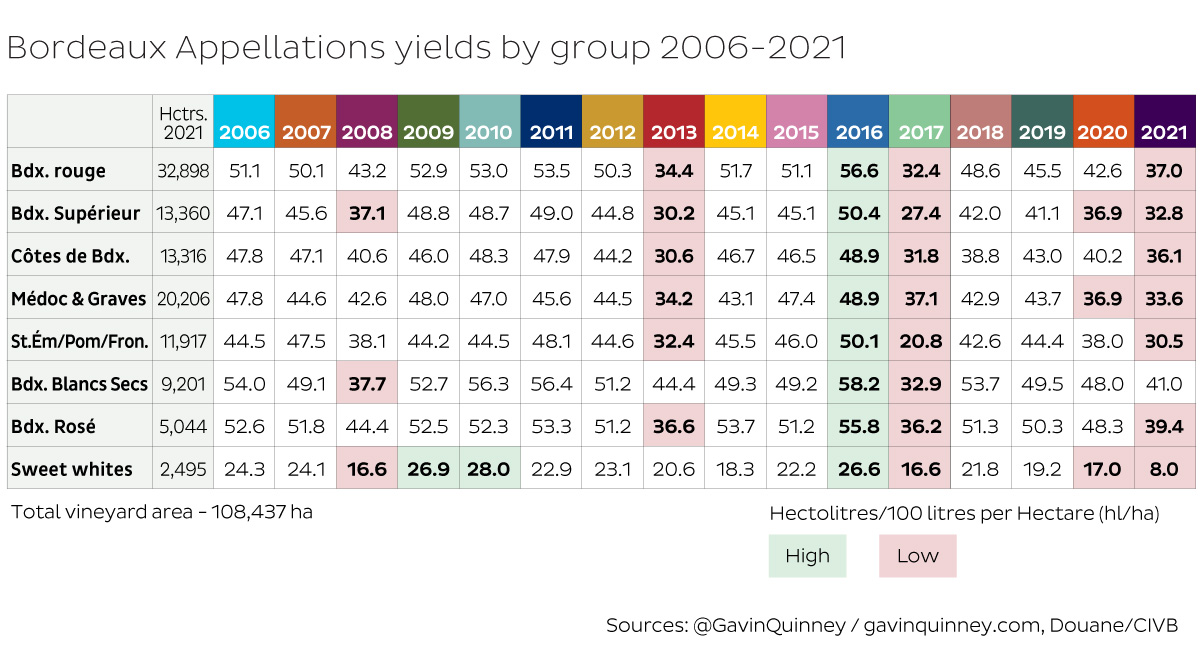 Yields per hectare were quite low across the board in 2021, although results varied considerably from one vineyard to another. 33hl/ha for Bordeaux Supérieur, for example, is a barely tenable proposition, financially. Yields for Bordeaux blancs were less disastrous, while the sweet white appellations had their worst yields for a long time, chiefly due to the April frosts.

Comparing the yields for top Appellations 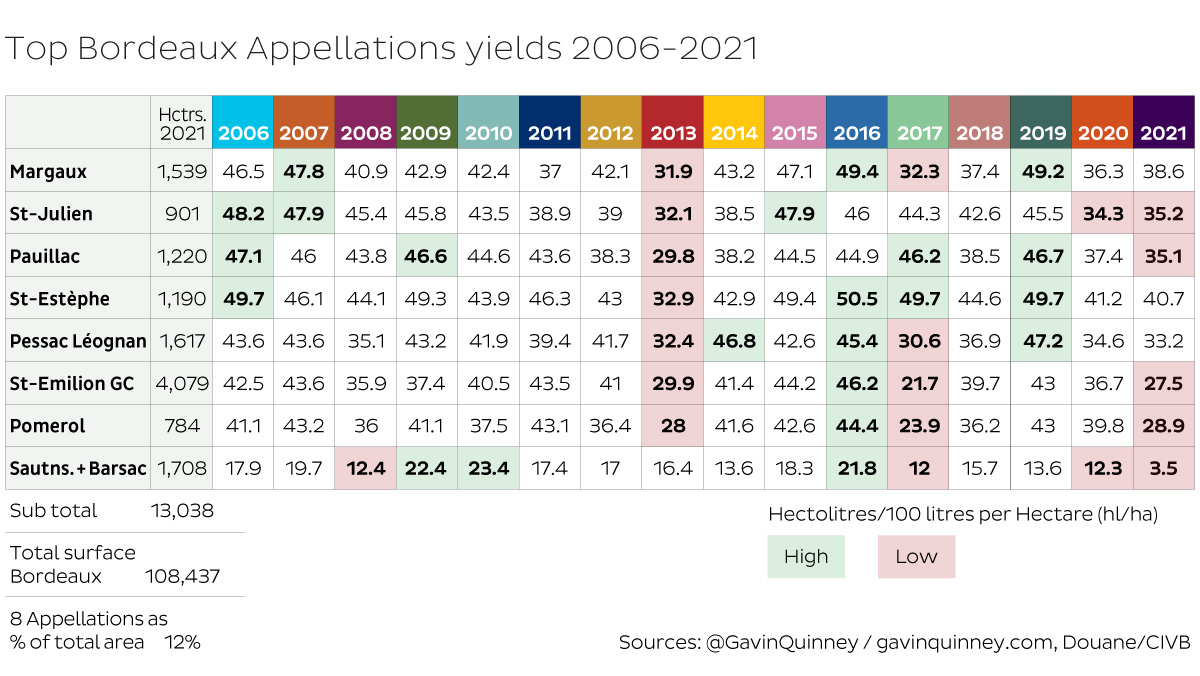 For the most prestigious and sought after appellations, there were mixed fortunes. Overall, compare the lower yields of recent years to earlier vintages (and 2004 and 2005 were generous years too). Saint-Estèphe usually outperforms its neighbours in terms of yields, while Saint-Émilion and Pomerol saw yields of below 30hl/ha, though they can consider themselves fortunate compared to Sauternes and Barsac.

The Bordeaux geek’s map of yields 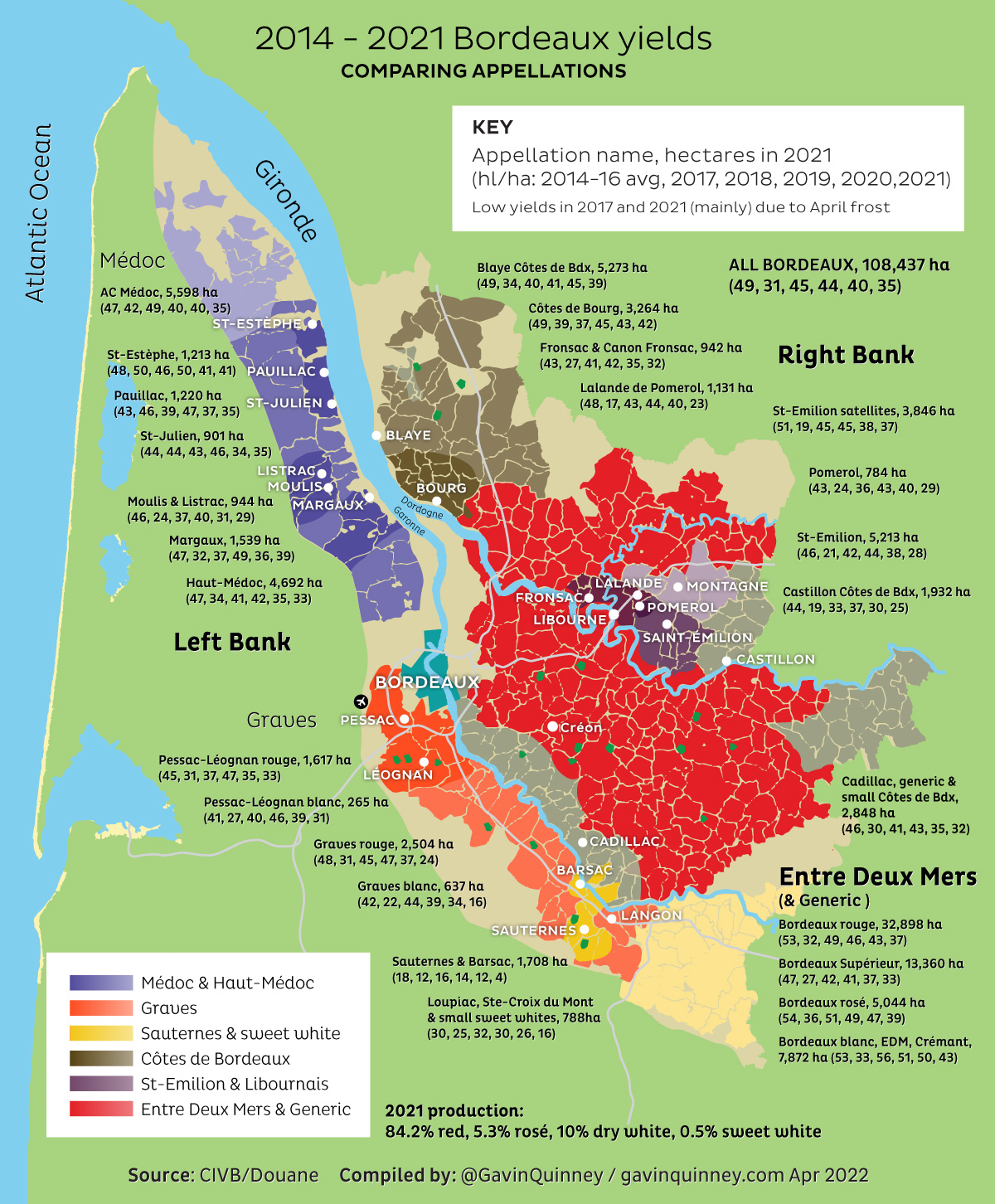 For this map, I’ve added Pessac-Léognan white and red separately to show how little there is of the excellent whites in 2021. Likewise the Graves.

Every year is different, of course. Bear in mind that irrigation is not permitted so the rainfall, or lack of it, plays a huge role. Unfortunately the frost in April 2017 and again in April 2021 made a big difference. The other years below produced numerous very good to outstanding wines. 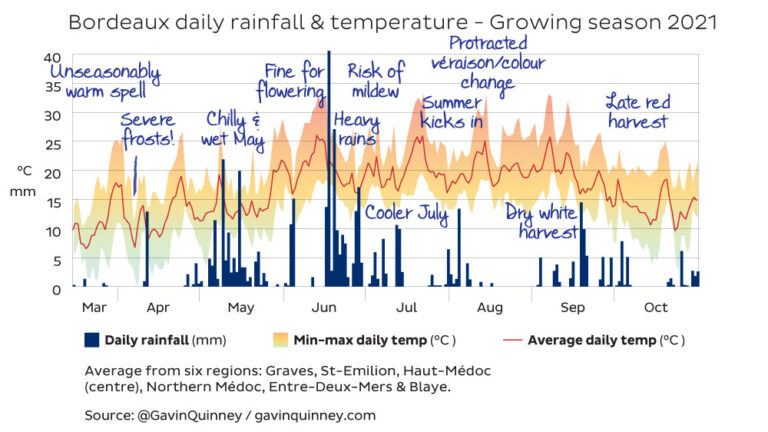 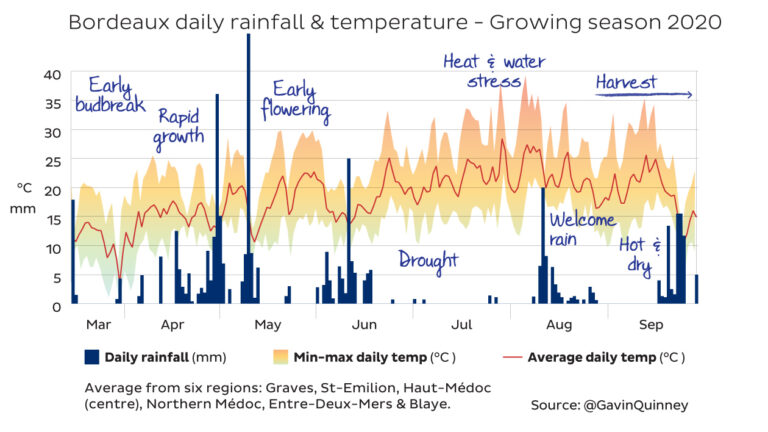 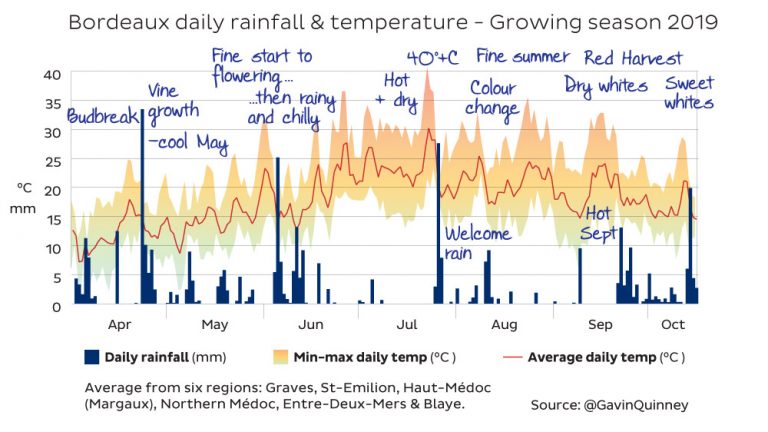 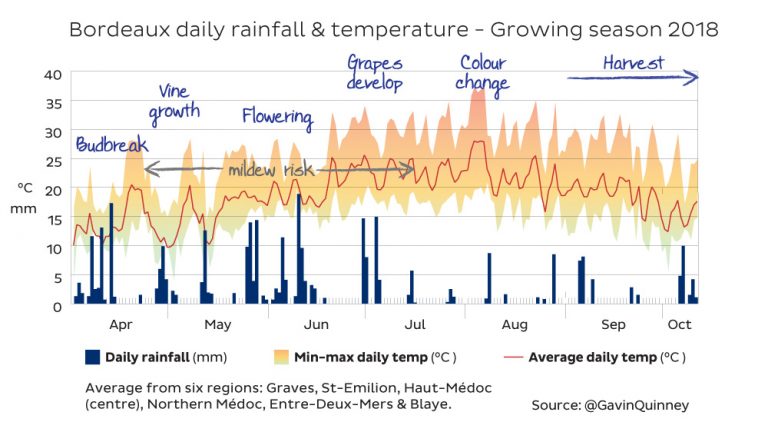 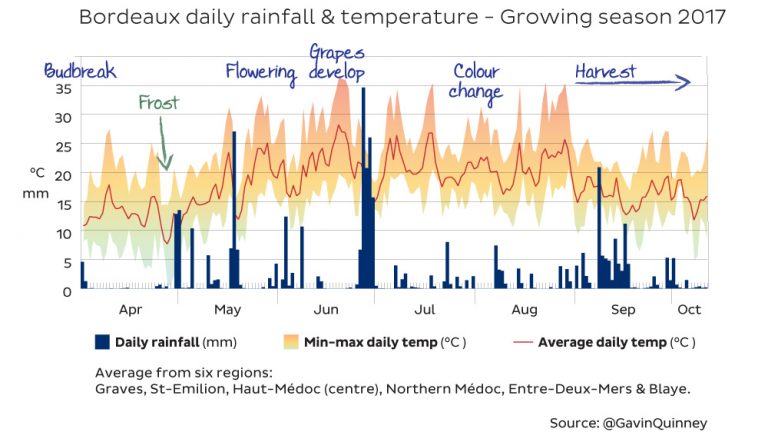 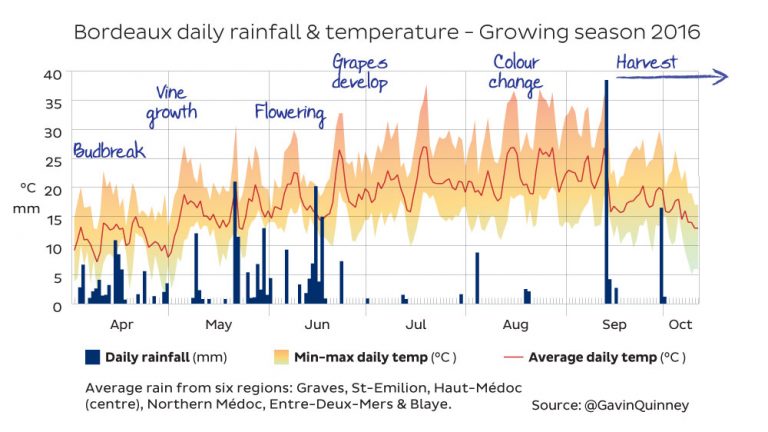 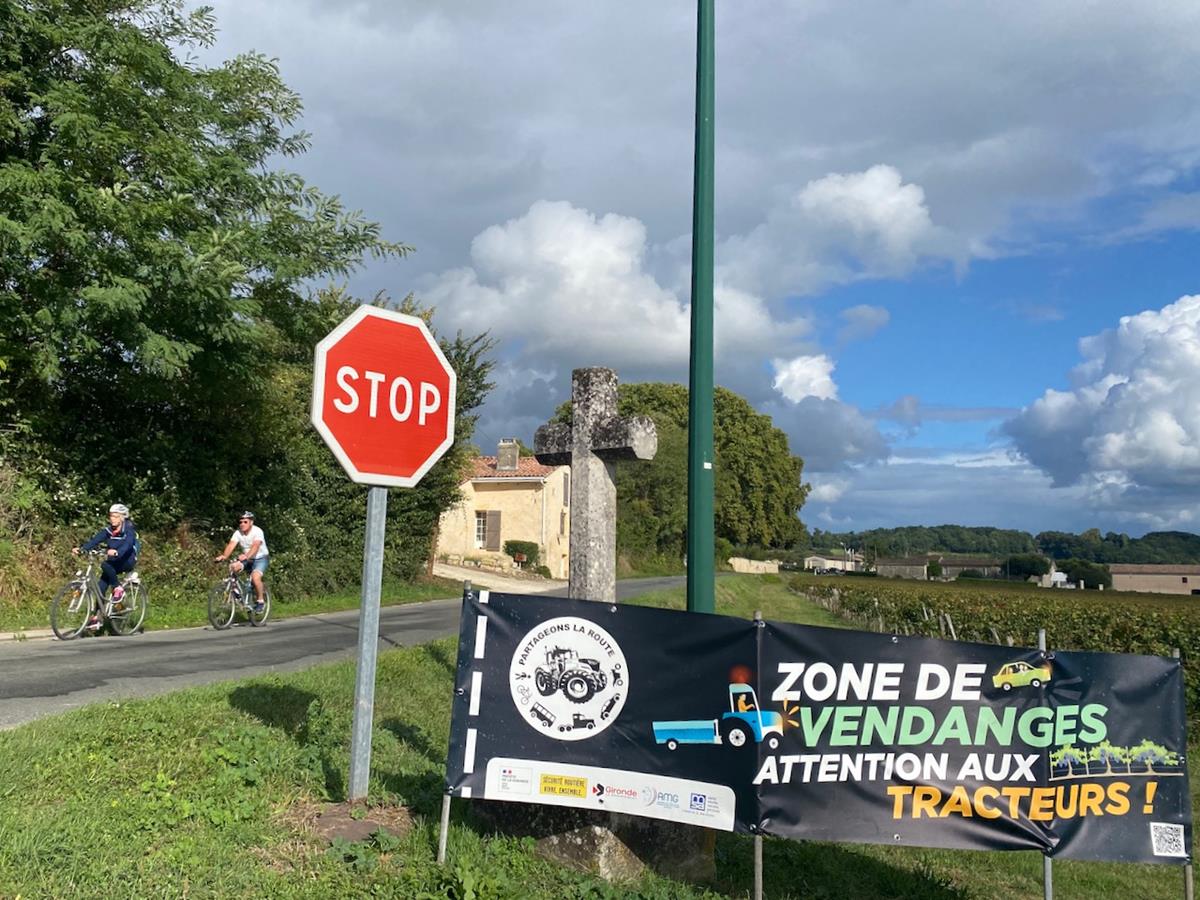