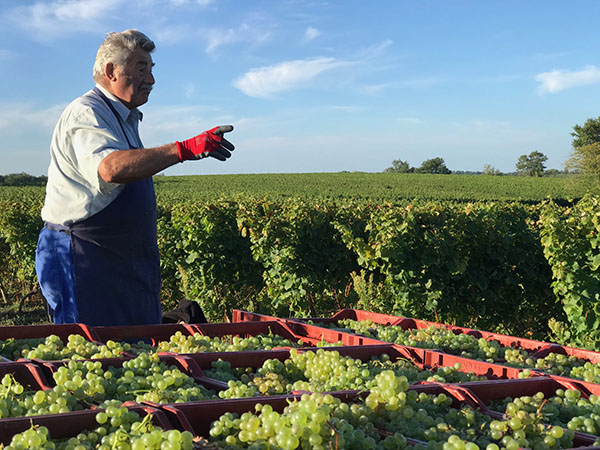 This month has seen our twentieth harvest at Bauduc. We took over the grapes that were on the vines when we arrived at the start of September 1999, so we haven’t quite clocked up 20 years, but the 2018 vintage is still a (frightening) milestone. Daniel was already here, and he still has no grey hairs, while Nelly joined us as a trainee. Pictured below, they’ve both put up with us ever since. Meanwhile, Michel, above, and better known as known as Papi, had already retired back then yet he’s volunteered to help in each and every harvest, and at 85 is still going strong. There’s hope for us all yet. 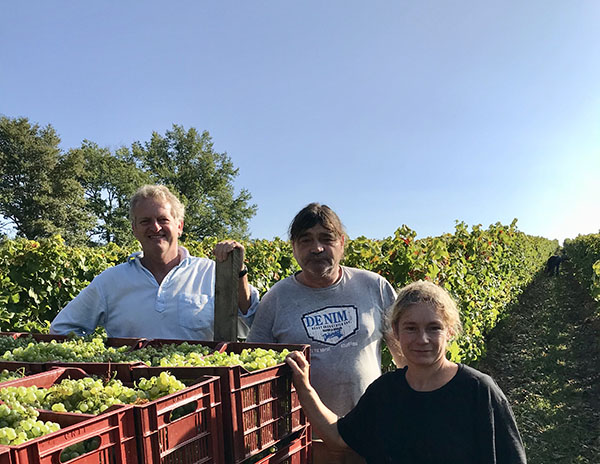 There’s a flavour of the 2018 harvest below and we’ve uploaded some photo albums on our website. It has also been a gloriously long, hot summer for the guests in our farmhouse as well as for the vines. Prices and availability for the farmhouse in 2019 are now online, so do let us know if you’d like to book a week. 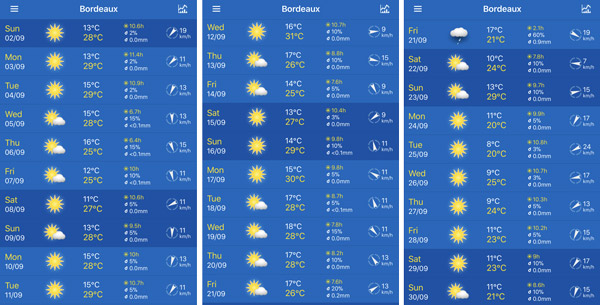 A remarkable month, and a continuation of the warm and dry summer. The weather forecast has been the most accommodating that we can remember - we can’t recall a harvest with such a consistently sunny outlook for days on end. To be fair, these were only three 10-day forecasts, not the actual stats, but you get the idea. (We had a little refreshing rain on Sunday 9th and Friday 21st.) 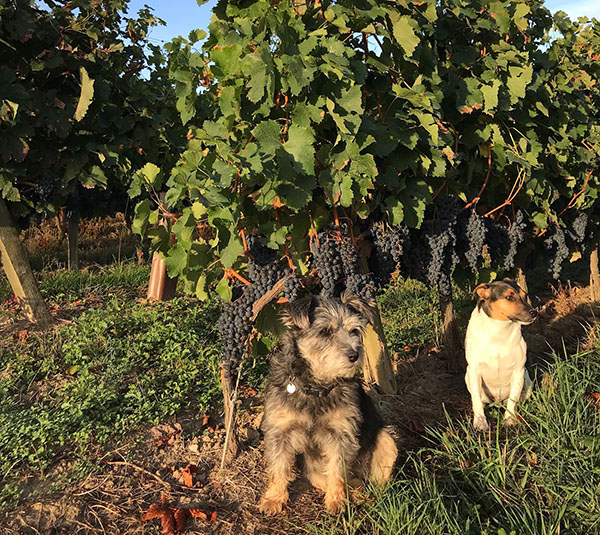 For the fourth vintage on the trot, there’s been no risk of rot at harvest time, but we have had to judge the timing carefully so as not to have overripe grapes, or go too early. 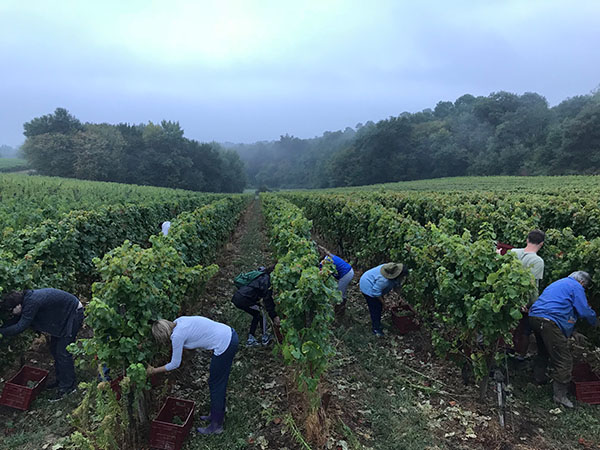 We started the white harvest on the unusually misty morning of Thursday 6th September and hand picked a parcel of vines over the next two mornings for our Crémant de Bauduc. Crémant is a sparkling wine from designated appellations in France, like Burgundy, the Loire and Alsace, and it’s made in the traditional method with a second fermentation in bottle. Given the amount of work involved, this category of sparkling wine can offer terrific value. 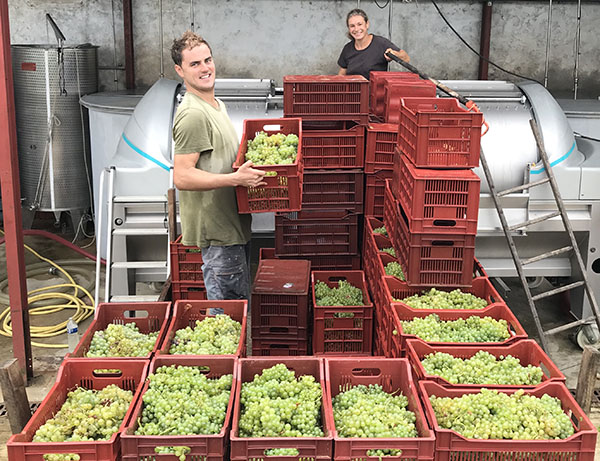 Not many people know this but Crémant de Bordeaux, in our case, has strict rules dictating that the grapes must be picked by hand into stackable crates, to ensure that all the grapes go into the press in whole bunches and with minimal risk of oxidation of the juice. Picked a little earlier than for our dry whites, the juice is currently cool fermenting in a stainless steel tank; it will later have a second fermentation in bottle, once we’ve added some yeast and sugar, just like in Champagne oop north. 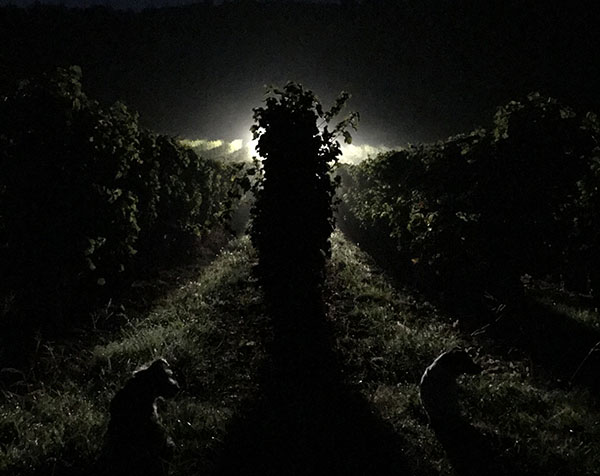 Spot the dogs. For some ungodly reason, we kicked off the harvest for our Sauvignon Blanc dry white at 5am on Sunday the 9th. This conveniently followed on from a dinner we’d hosted the night before for the team from 67 Pall Mall, the celebrated wine club, some of whom had run in the Médoc marathon on the Saturday and were staying for the weekend. 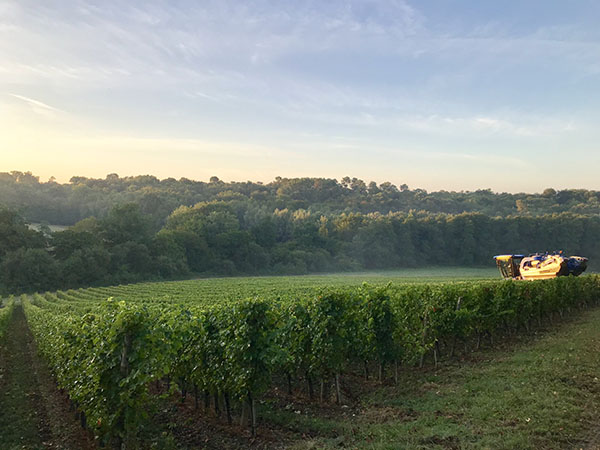 That morning’s harvest was wrapped up by 9am, and the timing was similar for subsequent shifts using the machine we hire in, with the Sauvignon being brought in during the coolest part of the day, including the following Sunday morning from 5 to 9am. 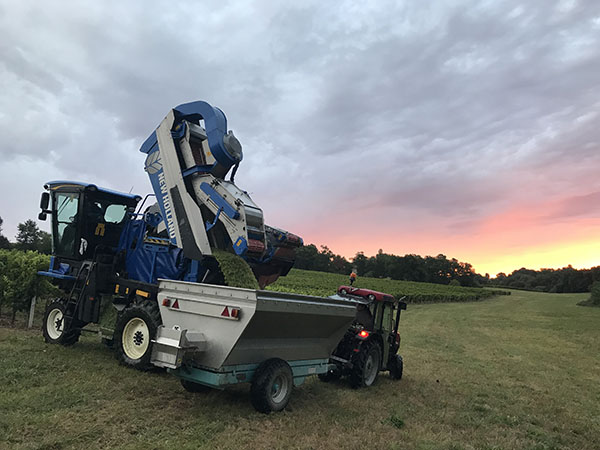 Actually, there was method in the madness. Machine harvesting Sauvignon early in the morning makes a lot of sense when you see the daytime temperatures above. The grapes are lightly crushed and go into chiller tanks for up to 24 hours so that the skins macerate with the juice briefly, before settling and then cool fermentation. That’s all happening now and after the disappointment of losing half the crop to a late spring frost in 2017, it’s comforting to have some full tanks again. As in 2016, after the drought that summer too, you wonder where all the juice comes from. Clever things, vines. 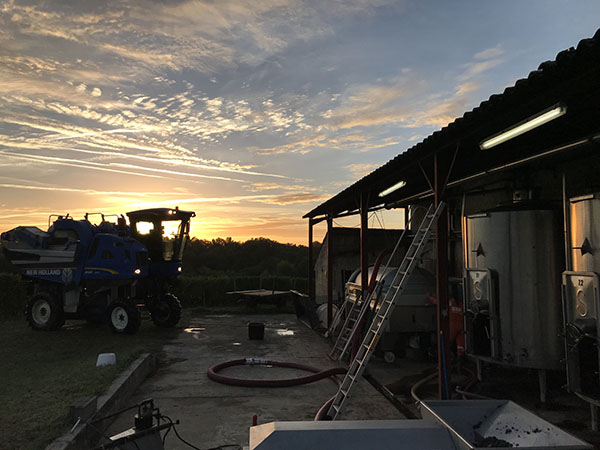 Last Saturday morning we harvested some Cabernet Sauvignon and Cabernet Franc for our rosé, having brought in some Merlot earlier in the week, also for rosé. That came in at a fresh 9°C (it’s cooler out here first thing in Créon than in Bordeaux) and later in the day it was 30°C. Harvested chilled/served chilled, is the plan. Some Bordeaux rosé is a by-product of making red, by bleeding off some juice from the tanks of red grapes and juice before fermentation. 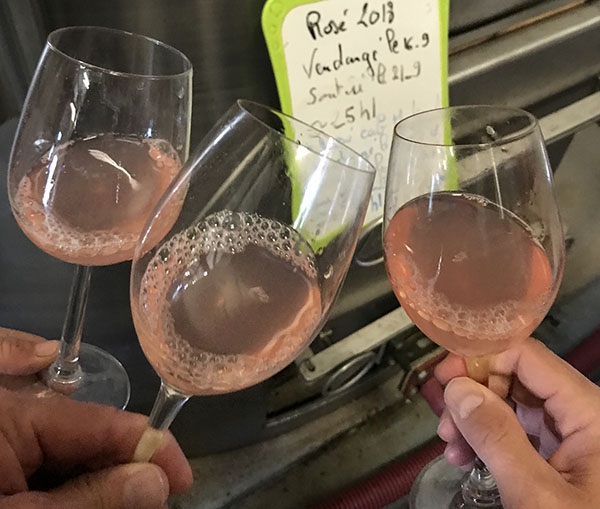 Our routine is to decide which plots will make the best rosé and harvest those grapes to make a deliberate or intentional rosé, as it were, and that means earlier picking than for the reds. We’re aiming for lower alcohol and higher, refreshing acidity in the rosé. Only the free run juice is used, to keep it pale, with minimal colouring from the skins. As with the whites, the rosé is now fermenting away. 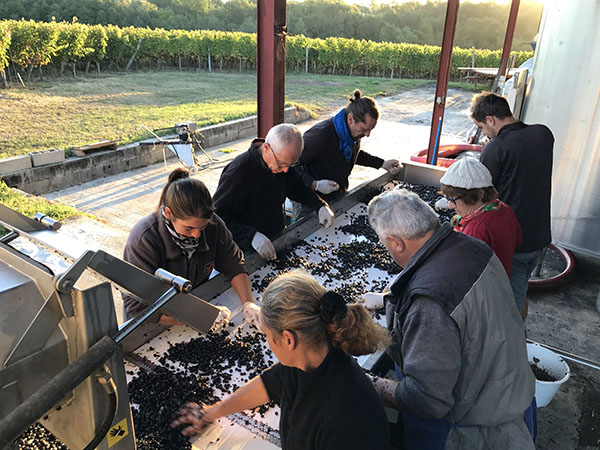 We started our red harvest proper yesterday, on Thursday 27th September. Some leading Châteaux with more precocious vineyards began earlier, with many towards the end of last week and others this week. We’re harvesting Merlot today again, and will be tomorrow, Saturday. Our Cabernets, below, will be from next week. 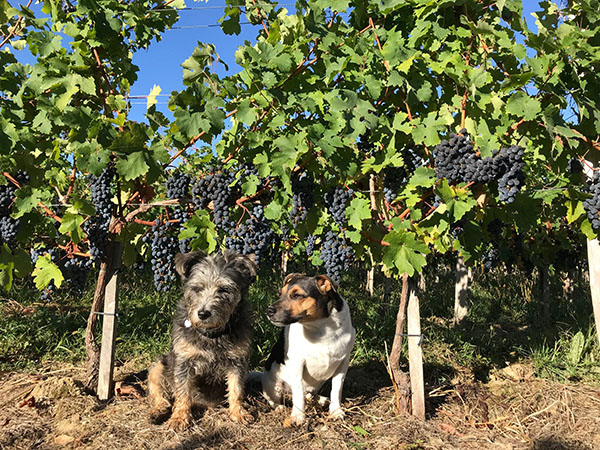 The days are still remarkably sunny and warm, and we’re taking advantage again of the seriously chilly mornings by starting around 6am. The grapes are coming in cold and they go into the stainless steel tanks for a cold soak of the skins with the juice, after a light crushing, before we start the fermentation several days later. 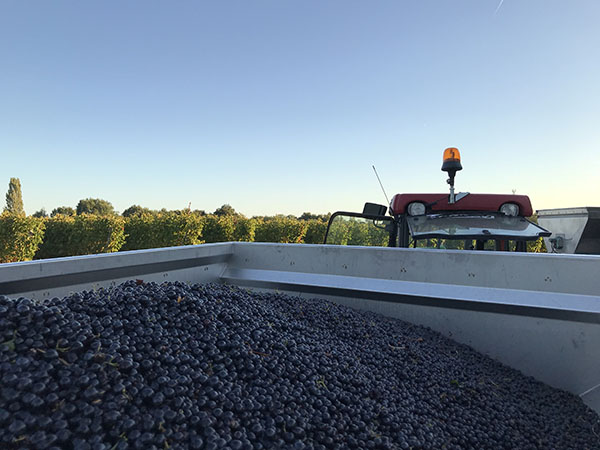 The harvesting machine we use has an onboard sorter but before the grapes go into the tank we make sure that there aren’t any stalky or green bits via the team on the sorting/conveyor table. We do this extra checking for the reds because whatever goes into the fermentation tank will be in there for some weeks - skins, juice, pips and so on - unlike for the whites for which we ferment just the juice, without any skins or solid matter. 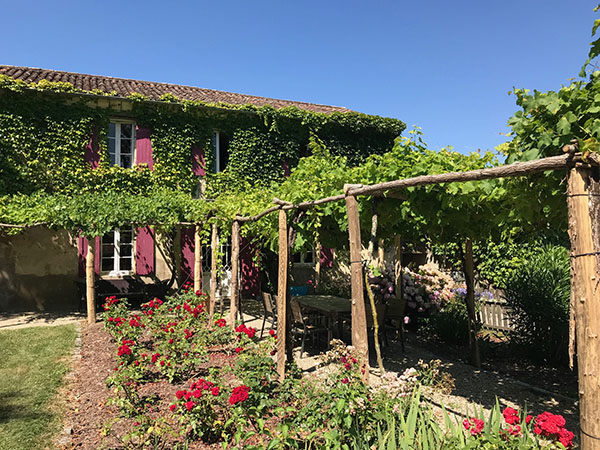 Our charming farmhouse has been as popular as ever this summer and here are the prices and availability for 2019. The house sleeps eight, has a big open-plan downstairs room looking out onto the lovely south facing garden, a delightful outdoor eating area under a vine-covered trellis, and a heated swimming pool. It’s a terrific base for exploring the region as we’re within 30 minutes of the city of Bordeaux and Saint-Emilion, or really for doing very little: there’s excellent food shopping nearby and seriously good wine even closer. The house is available by the week, Friday to Friday, from April to October. 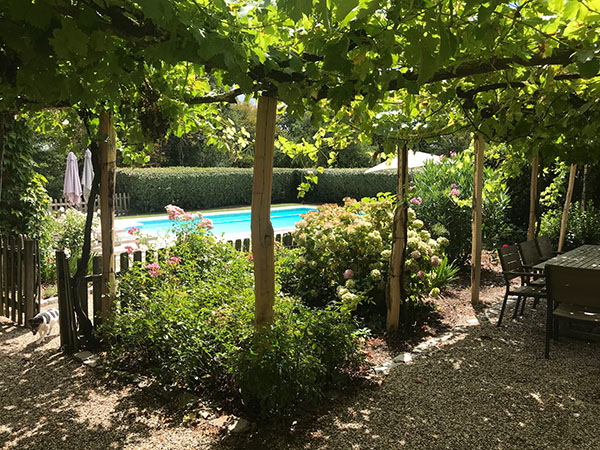