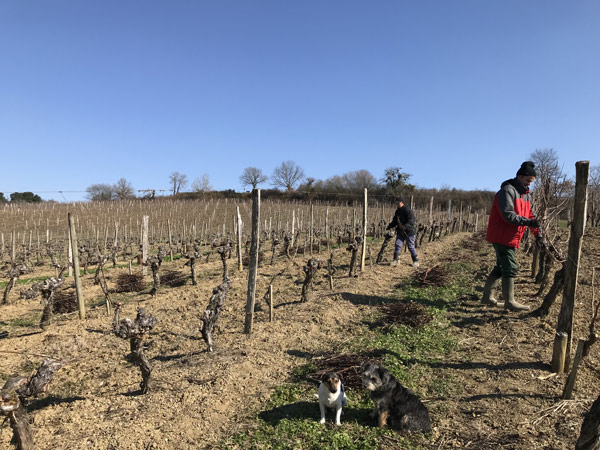 A cold February has been good news for us as the vines have had a decent winter break, and we’ve been able to prune them without the imminent risk of the sap rising prematurely. We have, pretty much, just the young plantations to go now. We’re also relieved that we decided to delay the bottling of our 2017 whites and rosé until March, thus avoiding the freezing temperatures.

Talking of 2017 and frosty weather, the official production figures for last year’s harvest in Bordeaux have now been released, on the quiet. Regular readers will know that we like to graph up the odd stat or two, and fans of this sort of analysis won’t be disappointed in the missive below. There really are some interesting numbers to look at - it’s a year of hugely contrasting fortunes - and we were even quoted at length on this in the FT last week. Others, quite understandably, might want to move swiftly on. 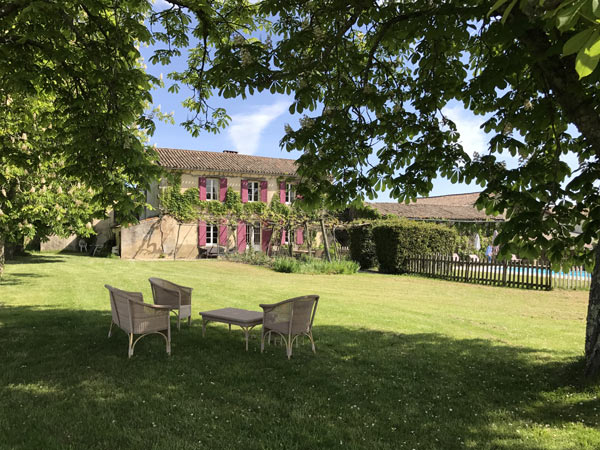 Our gorgeous farmhouse is all booked up for May, June, July, August and September - except for three juicy weeks: the first weeks of May, June and July respectively are all still available, as are a couple of weeks in April and October. By first weeks, we mean the Friday to Friday slots of 27/4 to 4/5 (£1500 pw), 1/6 to 8/6 (£1950) and 29/6 to 6/7 (special rate of £2100 due to a cancellation). Private pool and garden, 4 bedrooms, sleeps 8, overlooks the vineyard, home from home, direct private bookings only - and there is no charge for the specially trimmed ‘sarments’ or vine trimmings to fit the barbecue that are being cut (as above, top photo) as we speak. 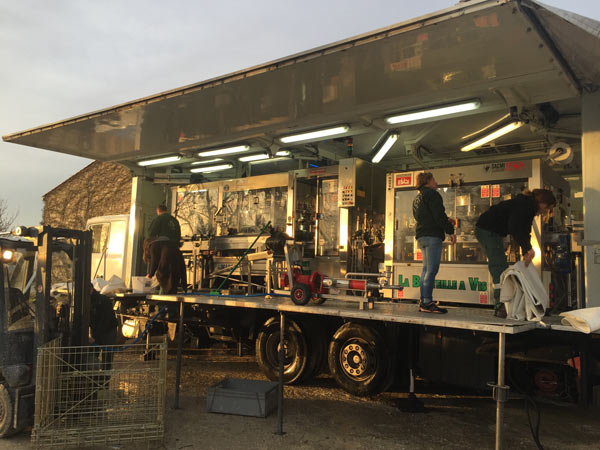 We’ll be bottling our 2017 Sauvignon Blanc, Les Trois Hectares white and 2017 rosé at the château in mid-March. In the past, we’ve usually bottled these wines in February but the bottling machine has occasionally succumbed to the icy weather at the start of the day if we pick the wrong time. Having a bumper crop in 2016 has eased stock availability until now, while the small 2017 harvest will soon disappear quite quickly after bottling. It’s a relief not to have to ‘beat the Budget’ for spring UK shipments (the UK Budget has been permanently shifted to the Autumn), though it does mean that deliveries before the early Easter on 1st April are pretty unlikely. 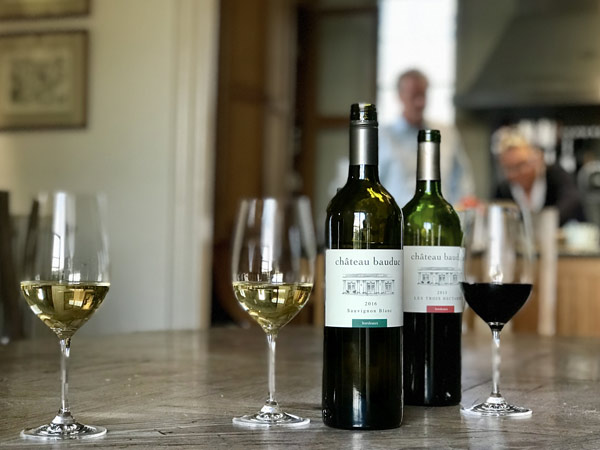 In the meantime, our 2016 Sauvignon Blanc had a nice write-up in in the February issue of Decanter by the magazine’s tastings director, Christelle Guibert, in her Weekday wines column: “Celebrity chefs Rick Stein and Gordon Ramsay have this as their house wine - and you should too, even if your cooking might not be quite as good! It’s forward and ripe with fresh mango and papaya characters, a nice creamy texture and balancing acidity. 89/100.”

Last few cases in the UK 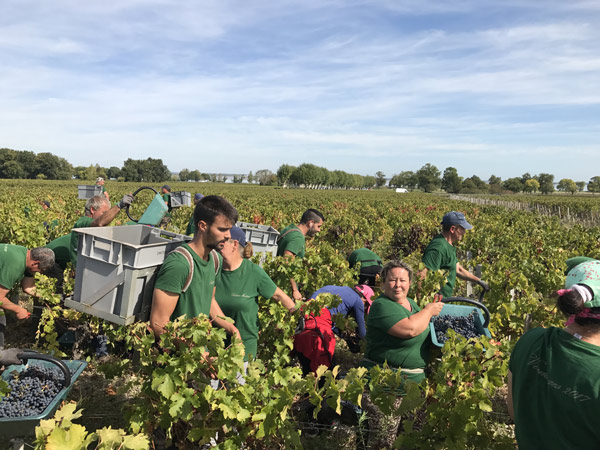 Heath warning: this is the last section of the newsletter and we’re publishing the whole, somewhat detailed article here. (It’s possibly not for everyone.) You can also find it on Gavin’s site here and shortly on Jancis Robinson’s website and on Liv-ex.

The 6,500 growers in Bordeaux had to submit their 2017 harvest declarations in December and the numbers have now been counted up. While Bordeaux enjoyed the largest crop for over a decade in 2016, 2017 was 40% down on the previous year and 33% lower than the 10-year average. And with Bordeaux, 40% is a lot of wine – the equivalent of over 300 million fewer bottles from one year to the next. 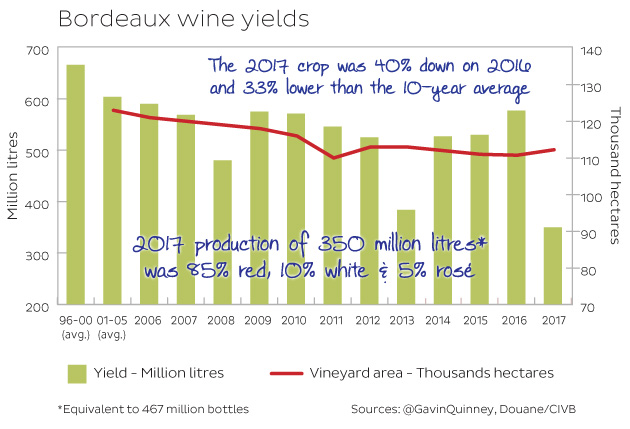 The figures also confirm that 2017 was a year of dramatically mixed fortunes for those viticulteurs, and this was chiefly down to the varying levels of impact of the late spring frost at the end of April 2017. In an article entitled Epic crop fail made it a bad year for bulk wine, the Financial Times picked up on a counter-comment from my harvest and weather report last Autumn: “For enthusiasts, buyers and collectors of fine wine, it’s first worth noting that 80 percent of the top 150 châteaux enjoyed a good harvest; there was minimal (frost) damage to the plots which provide the grapes for their first wine or ‘grand vin’. So, at the top end, there should be reasonable volumes, and good quality, from many of the blue chip names.”

In fact, the three leading appellations of the northern Médoc, Pauillac, St-Estèphe and St-Julien, actually had a larger crop in 2017 than the average of the five preceding vintages: 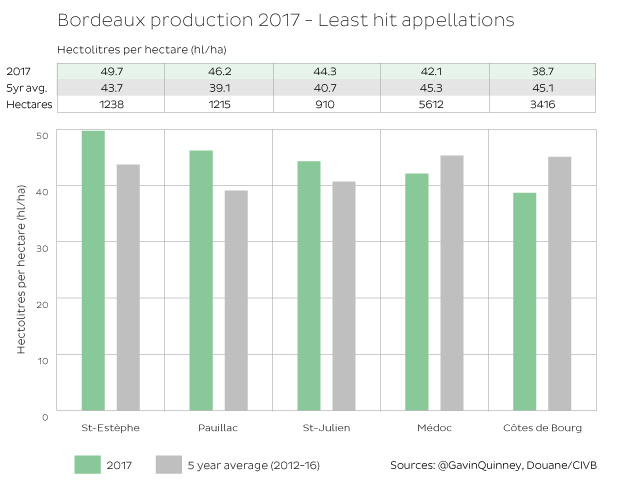 They were the lucky ones. The Drinks Business magazine referred to my harvest report above as a ‘now annual deep-dive into the recent growing season and harvest across the Gironde’ (thanks, Rupert), so here I’ll plunge even further with a look at the production figures.

All the appellations above escaped or suffered the least damage thanks to the benign influence of the Gironde estuary during the late April frost. Further south, many vineyards in Margaux and Pessac-Léognan were not so fortunate, though some were hardly hit, but overall figures in St-Emilion and Pomerol across on the Right Bank were fairly devastating. However, it should be noted that, despite the low production overall here, many of the top estates escaped the worst of the damage – especially those on higher ground. Here are the yields, expressed in hectolitres (100 litres) per hectare, over the last 12 years for the most prestigious red wine appellations: 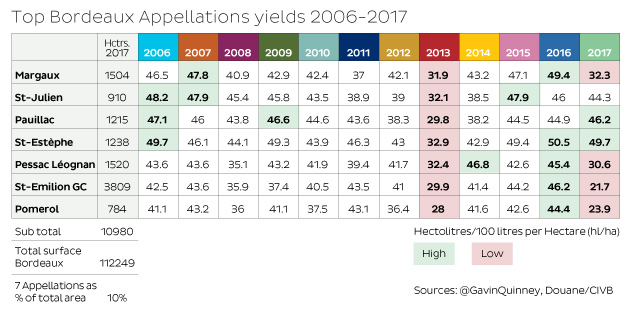 I’ve highlighted the years with the highest yields in green and the lowest in red. With the exception of those northern Médoc appellations, 2013 and 2017 stand out as the weakest vintages in terms of volume. Note that all these more expensive appellations, which are home to the vast majority of the famous and sought-after wines that are sold ‘en primeur’ or as ‘futures’, make up just 10% of the total Bordeaux vineyard. Here’s the broader picture for Bordeaux, bringing together the appellations into manageable groups: 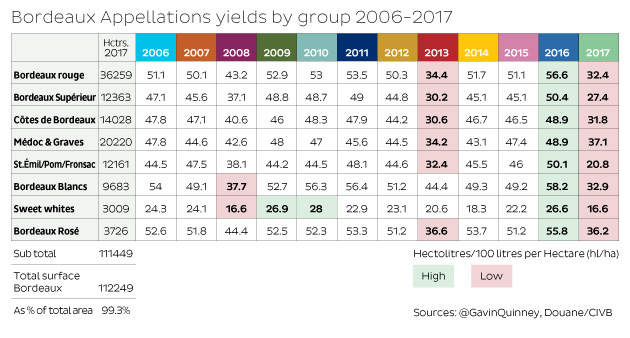 To help with the geography and many of the names mentioned here, here’s the frost map of Bordeaux from an article I put together last May after driving around the region. 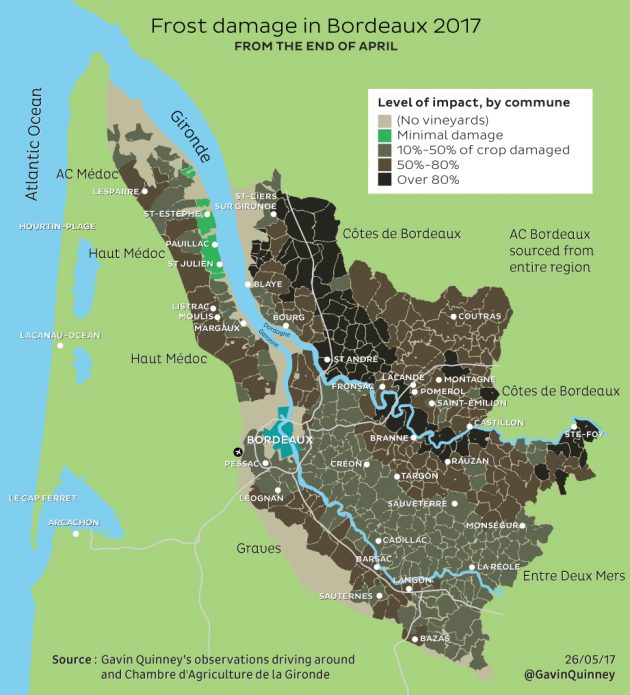 Along with St-Julien, Pauillac and St-Estèphe at the northern end of the Haut-Médoc, the large Médoc appellation further north suffered less than other areas. Some inland parts of the Médoc appellation were hit but not those closer to the estuary. It was a similar story across the Gironde in the Côtes de Bourg, and parts of Blaye.

The drop from 2016 to 2017 elsewhere is even more stark when we look at the actual amount of wine produced in different parts of Bordeaux. Again, I’ve separated out all the ‘named’ appellations and grouped them into logical chunks, leaving out the huge, generic Bordeaux red appellations for now as they distort the scale: 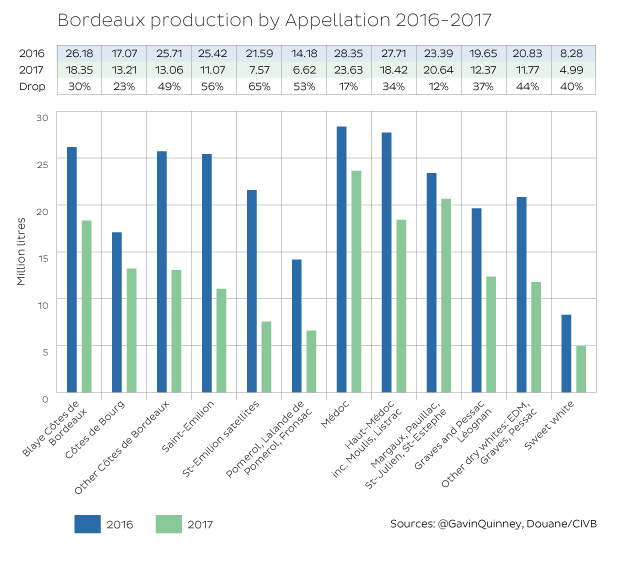 We can really see how badly some areas were hit by the frost. The pretty Saint Emilion ‘satellite’ appellations, covering close to 4,000 hectares, were nearly two thirds down on 2016. St-Emilion itself comprises two large appellations, St-Emilion Grand Cru and St-Emilion. Combined they were down 56% on the generous 2016 – from around 34 million bottles to less than 15 million. By contrast, the four major Left Bank appellations of Margaux, St-Julien, Pauillac and St-Estèphe saw a fall of just 12% and that was largely due to parts of Margaux being hit by the frost.

Here are those worst hit areas in a little more detail, comparing the volumes in 2017 with the average of the previous five vintages: 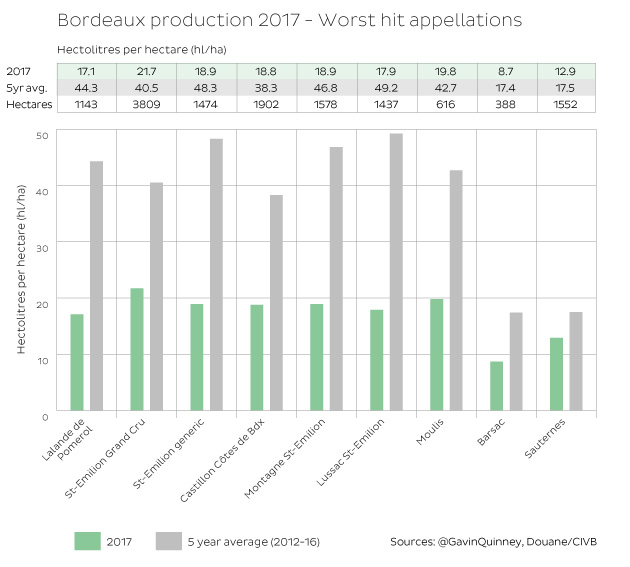 In actual fact, the small area of Côtes de Francs – next to Castillon – saw the lowest yield of all the red appellations at 13.9hl/ha but as it covers ‘only’ 369 hectares, I’ve left it out. Lalande de Pomerol saw the lowest yield of the more prestigious, sizeable red appellations at just 17.1 hl/ha – just a third of the 51 hl/ha it managed the year before. Although the Right Bank was much more widely impacted by the frost, some parts of the Left Bank were similarly affected. Moulis, set back from the Gironde estuary in the Haut-Médoc, was seriously impacted, and far to the south of the city of Bordeaux, the lovely sweet white appellation of Barsac saw a very small crop – even by their standards – with just half the 5 year average.

Once again, when we think about all the specific geographical appellations, they may represent the best known names of Bordeaux but they account for less than half the production: 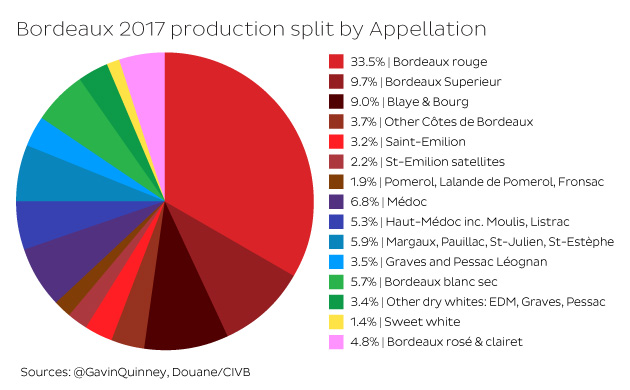 The generic Bordeaux appellations of red, including Bordeaux Supérieur, and rosé make up about half the annual output, with Bordeaux Blanc in addition. These wines, which come mostly from the Entre Deux Mers, and the Merlot-dominant Right Bank reds, dwarf the wines from the Left Bank in volume terms. Note that the Bordeaux vineyard area has remained pretty stable (at 112,249 hectares in 2017) for the last seven years, after a reduction of almost 10,000 hectares from 2006 (121,496) to 2011/2012. The decline in the overall size of the vineyard was intentional, coming about mostly by growers in lesser appellations being offered grants to rip up inferior plots. 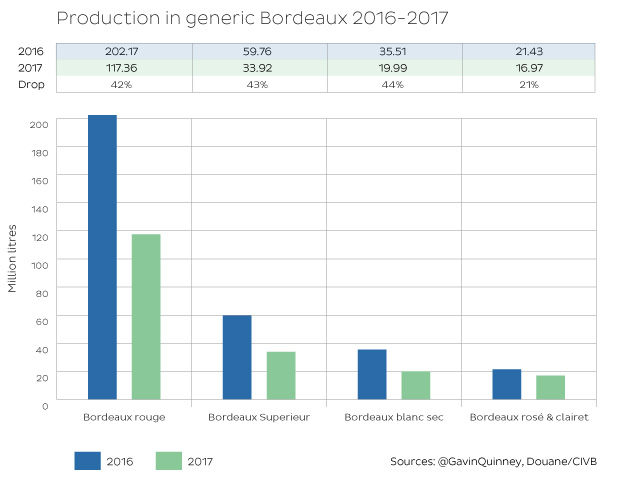 Bordeaux Rouge and Bordeaux Supérieur red were considerably down, by 42% and 43% respectively, in 2017 after a large crop in 2016. White was down by a similar percentage and prices for bulk wines have inevitably gone up. Part of the reason why the rosé decrease is lower is that a higher proportion of rosé was made compared to red: 500 hectares that made red in 2016 were declared as rosé in 2017.

For many hundreds of growers, surviving the impact of the frost damage is going to be tough, especially with two low-yield years from the last five. For those châteaux that escaped the worst of the frost, 2017 has turned out rather well. But I sense they won’t be shouting about it out of respect for their neighbours and friends.

Meanwhile, I’ll get back to preparing for the bottling of our half-measures of 2017 whites and rosé. Onwards and upwards.